Father Funes says the universe is so vast that other life forms may exist. 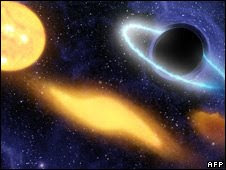 The Pope's chief astronomer says that life on Mars cannot be ruled out.
Writing in the Vatican newspaper, the astronomer, Father Gabriel Funes, said intelligent beings created by God could exist in outer space.
Father Funes, director of the Vatican Observatory near Rome, is a respected scientist who collaborates with universities around the world.
The search for forms of extraterrestrial life, he says, does not contradict belief in God.
The official Vatican newspaper headlines his article 'Aliens Are My Brother'.
'Free from sin'
Just as there are multiple forms of life on earth, so there could exist intelligent beings in outer space created by God. And some aliens could even be free from original sin, he speculates.
Asked about the Catholic Church's condemnation four centuries ago of the Italian astronomer and physicist, Galileo, Father Funes diplomatically says mistakes were made, but it is time to turn the page and look towards the future.
Science and religion need each other, and many astronomers believe in God, he assures readers.
To strengthen its scientific credentials, the Vatican is organising a conference next year to mark the 200th anniversary of the birth of the author of the Origin of Species, Charles Darwin.
Best of Organic Roses, Giovanni French
mystrawhat.com $$$$$$$$$$$$$ myspace.com/mosshead7
Posted by My Straw Hat at 8:18 AM