A Woman Dedicated to The NEWS and Her Son, Greg (Host of FNC's Hit & Hip Late Nite Show = Red Eye)... 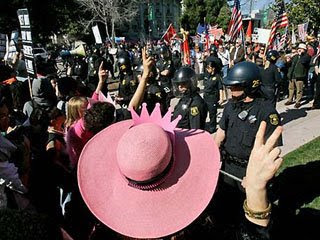 (Friday night during the taping of Red Eye which viewed early early Saturday morning at 3:00 a.m., when reporting on the day's events Mrs. Gutfeld told her son, Greg, and his side-kicks, guests and the world how she wishes she could have been in Berkley to witness the unsual events unfolding...)

The women's anti-war group has told ralliers to come equipped with spells and pointy hats Friday for "witches, crones and sirens" day, the last of the group's weeklong homage to Mother's Day.

"Women are coming to cast spells and do rituals and to impart wisdom to figure out how we're going to end war," Zanne Sam Joi of Bay Area Code Pink told FOXNews.com

Best of the Roses,
John French
mystrawhat.com myspace.com/mosshead7
Posted by My Straw Hat at 9:18 AM