Obamacare premiums are going up next year by an average of 25%. The way people react to a story largely depends on how it's presented and what they already think. So we went out on the street and made it seem like higher premiums are a good thing. This is how people took it in our first-ever edition of #PositiveSpin.
https://www.youtube.com/watch?v=anNWYPfK2oU
2).

Turns out some of the jokes were even more awkward for people who were at the event.
One man, for example, distinctly widened his eyes in shock when Trump declared that Hillary Clinton was so corrupt, she was "kicked off the Watergate Commission."
starts at minute 12:36 of this youtube clip Full monologue: Donald Trump roasts Hillary Clinton at Al Smith charity dinner

Typically more unscripted than most in D.C., this face may take it to a whole new level. Smerconish posited that Clinton should have released all her emails from the "get-go" to stop the controversy in its tracks, but Biden went to her defense. "I don't know where these emails came from," Biden says. "Apparently Anthony Weiner," Smerconish replies. Then comes the glory. "Well, oh God, Anthony Weiner..." Biden says trailing off, closing his eyes and looking away trying to compose himself before admitting, "I should not comment on Anthony Weiner. I'm not a big fan. I wasn't before he got in trouble. So I shouldn't comment on Anthony Weiner."
https://www.youtube.com/watch?v=Cd1mIh1tUig 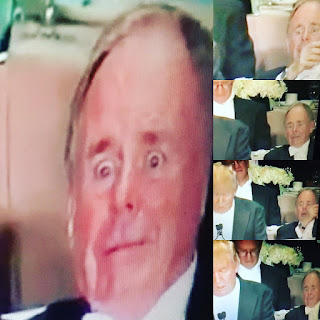