I'll get to the online Entertainment Weekly Book Review in a second here.

This book that I have in our library has a personalized inscription inside by Wallace Fowlie that reads: "For John Alan Conte`, Jr., our frienship begun here - March 13 1996 Wallace Fowlie" 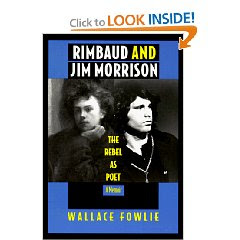 By D.A. Ball
''Dear Wallace Fowlie...thanks for doing the Rimbaud translation...I am a rock singer and your book travels around with me.'' The 1968 note was signed Jim Morrison, but French literature professor Fowlie had no idea who that was. Like all good teachers, Fowlie asked his students and began applying his expertise to what they taught him. Twenty-six years later, the result is this lucid exploration of common ground between French symbolist poet Arthur Rimbaud and rock poet Morrison: the myths surrounding each, the forces that drove their astonishingly brief careers, and their electrically terse word-pictures. Rimbaud And Jim Morrison: The Rebel As Poet is good old-fashioned scholarly criticism that illuminates the poetry instead of ego-lighting the critic. Some will find it densely academic. But Morrison reportedly once said, ''Let's just say I was testing the boundaries of reality,'' and Fowlie, now a Duke professor emeritus, is that rare academician who can truly help us savor what Jim Morrison meant. A-