Eyewitness in Libya speaks out ...A360 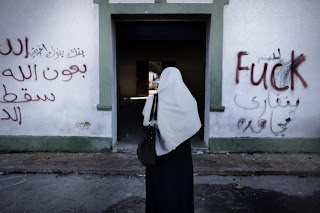 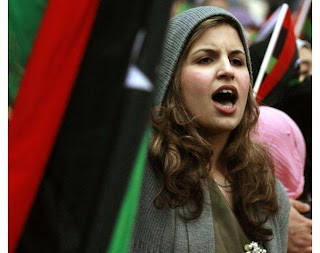 A Libyan woman walks towards a wall covered with graffiti against Libyan leader Moamer Kadhafi at a destroyed army barrack in the eastern city of Benghazi on February 28, 2011. Pressure mounted on Kadhafi after his opponents overran towns in his traditional western stronghold and world leaders called for him to end his iron-fisted rule.

A360, I love it ... This courageous woman sounds so smoking RED (FREEDOM) HOT over your air waves = whether "on drugs" or not as Moamer Kadhafi insists all protesters are on --- risking her life and "WINNING" ...
Sent from my Verizon Wireless BlackBerry

In an address to the United Nations Human Rights Council, Clinton said: "Young people know everything that is going on everywhere, and they no longer will tolerate a status quo that blocks their aspirations."