Driving into Pennsylvania we started to feel the road from Newport, R.I.
and may have even brought that Atlantic gail besieging our Volvo wagon.
It was evident we needed to pull over to eat, drink, shower and sleep.
We were tired however still stimulated from being highly aware from travel.
This spring night warranted hot toddies. I downed three or four and ate ribs.
My eyes also fed me and catapulted me back in time as a fellow into an old
English Tapestry on show at the Grosvenor House Hotel in London from June
14 to 28

More than 15ft wide and almost 6ft high, it is a work of art, a portrait of Elizabethan life and a triumph of craftsmanship.
Not to mention worth a million pounds.
For four centuries this magnificent tapestry remained hidden from public knowledge.
It was only thanks to dogged detective work by an art dealer that it was rediscovered in the U.S. and brought back to Britain, where it will be displayed this month before going on sale with its sevenfigure price tag. 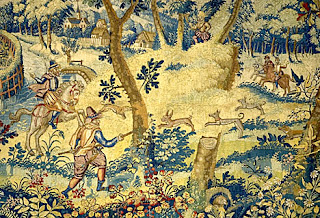 The intricately woven masterpiece was created in the Cotswolds workshop of William Sheldon, considered the finest tapestry maker of the 16th century. It probably took between one and two years to produce.
Art historians believe it was most probably made to order between 1580 and 1590 for a landowner or merchant to hang above a panelled baseboard in a Tudor country house.
Sheldon's craftsmen were mainly Dutch Protestants who had fled religious persecution in their homeland.
"The modern-day equivalent of the first owner would be the equivalent of an extremely-rich hedge fund manager buying a Picasso," says Will Bennett, spokesman for the Grosvenor House Art and Antiques Fair where it will be displayed.
The wool tapestry with silk highlights is one of only around 20 ever made by Sheldon. Only a small number have survived and few are in such good condition, since it has not been exposed to daylight or smoke. 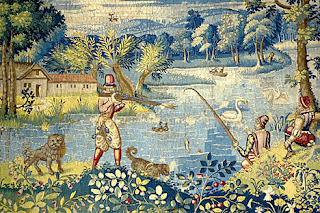 'It is one of the most important Sheldon tapestries to have survived. It is a stupendous thing'
It was designed to provide a lyrical and often humorous picture of English country life during the reign of Elizabeth I.
Art experts believe the image portrayed is based on idealism rather than the harsh reality.
For example, the castle in the centre of the piece is based not on any genuine English home but was almost certainly taken from an image of King Solomon's Palace printed in a German version of the Bible produced in 1564 by Jost Amman.
The work also contains several of Sheldon's trademark designs - such as the intricate border featuring gargoyles and coats of arms - yet despite this, it has only recently been revealed as an example of the tapestry-maker's work.
Around the palace a hunting party gallops through woodland glades full of wildlife, swans swim serenely across a lake, and a man with an early type of gun outrages anglers by firing it at some ducks and frightening the fish.

And so walking years later walking with the big little Lhasa Apso into an autumn morning that has lifted the dark veil of late October night
revealing a tranquil scene of a 21st century village along the Ohio River from the city of Pittsburgh
with valleys full of unforgettable life.
I have my own morning soliloquy transacting:

"Fall flourishes with pheasants for peasants and yet it's winter who is the victor - in its acts like a real baron."

We'll give you #Newsworthy 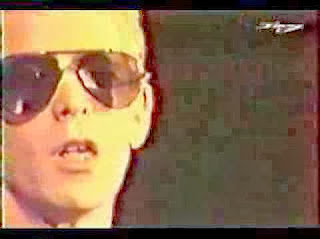 We'll give you #Newsworthy
Posted by My Straw Hat at 1:59 PM No comments: 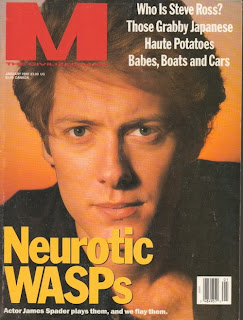 Today Fairchild Fashion Media announced that they're bringing back M magazine, which back in the 80's was initially known as M: The Civilized Man. "It will be a big beautiful magazine with a circulation of about 100,000," Fairchild Editorial Director Peter W. Kaplan told the New York Post's Keith Kelly. "It will be for guys in their thirties and forties who are Web-savvy but want to hold onto print."
It's an interesting move. And we get the gist: a high fashion-focused magazine for men, aimed at men of a certain age who might remember M in its glory days or younger men who want to enjoy a magazine printed on paper. It also makes sense since there's a dearth of American high fashion men's magazines. http://www.theatlanticwire.com

I read JFKJr's George Magazine to shape my politics. (Wish it had more time here on this planet). 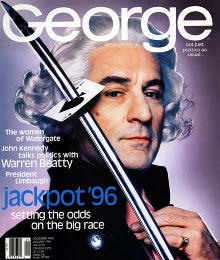 I'd like to see both of these magazines make a comeback via a re-launch. I think it would be a  positive source of content for impressionable young male minds who could use examples of what to aspire to for the next level in becoming a modern day man of good character.