Berlusconi's back on top 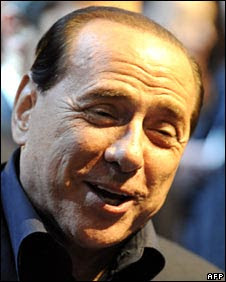 SILVIO Berlusconi has taken the reins of power in Italy for the third time at a swearing-in ceremony before President Giorgio Napolitano in Quirinal Palace. 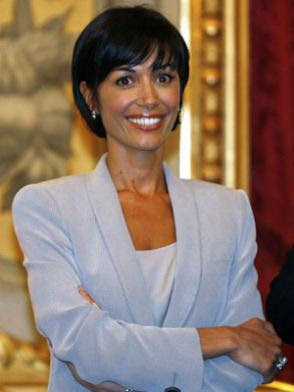 
Italy's latest Prime Minister, Silvio Berlusconi, is putting on a grim new face as he gets to grips with the country's economic woes. But last week he showed that he still has a keen idea of what the Italian in the saloon bar has on his mind, when he named Mara Carfagna as his minister for equal opportunities.
Ms Carfagna, 32, a second-term Forza Italia MP, hit the headlines last year when the media billionaire told her, close to a live microphone, that he would "marry her like a shot" if he didn't happen to be already married. Veronica Lario, the former actress and second Mrs Berlusconi, wrote to a newspaper that Berlusconi despises, ordering him to apologise – he did.
That did not stop him putting Ms Carfagna in his cabinet. "The most beautiful minister in the world" is how German daily Bild described her. There won't be much competition, at least not from Westminster.
However, supporters of Carfagna point out that, aside from appearing topless in calendars and voluptuously underdressed as the eye-candy on one of Berlusconi's TV channels, the young woman from Salerno has a law degree and is an accomplished swimmer, dancer and pianist.
Although Berlusconi is trying on a new statesman-like scowl, he had appeared to find something intrinsically risible about forming a government. He appointed the controversial Northern League former dentist, Roberto Calderoli, to a newly thought-up post as minister for simplification. Perhaps every country could do with one, but is Calderoli the right man? It was he who drafted Italy's present election law, later calling it a porcata (a load of rubbish).
Yet it does seem to tickle Berlusconi's funny bone to have beautiful babes in the equality ministry: the last incumbent was a striking Sicilian blonde called Stefania Prestigiacomo, who this time round has defied those who wrote her off as just a pretty face and climbed to the post of environment minister. Some girls are more equal than others in Berlusconi's eyes. They are the ones who get the call.
What exactly is the relationship between Berlusconi and his new pet? Ms Carfagna is known to have a steady boyfriend. And the first time she was invited to Berlusconi's flat in Rome's Palazzo Grazioli, it is said that she was chaperoned by her father, a diehard Berlusconi supporter, and that she entertained the company with a movement from Beethoven's "Pathetique" sonata.
But the old rogue cannot resist implying that there is more to it than that: clearly he gets a kick out of seeing his new minister blush. "Dear Mara," he said to her publicly on one occasion, "I am obliged to point out to you the rule that applies inside Forza Italia, the rule of ius primae noctis", which the medieval right of a feudal lord to sleep with the bride of one of his subjects on the first night of her marriage. "You know I like women of easy morals ..."