Doug Benson is an American comedian who has appeared on Comedy Central Presents, Best Week Ever, and most recently as a contestant on Last Comic Standing.

"You know that movie Super Size Me, where that guy Morgan Spurlock ate McDonald’s every meal for 30 days? People actually paid money to see that. Well, if that’s a movie, I’ve got a movie! I’m going to smoke pot every day for 30 days, and it’s going to be called Super High Me, or Business As Usual… I haven’t decided on a title yet. But guess what? McDonald’s is going to be in my movie too!"
– Joke from Doug Benson’s stand up act, 2006

Super High Me features comedian Doug Benson and explores the current situation with medical marijuana in California and the United States, specifically focusing on the conflict between federal and state law and the explosive growth in medical marijuana dispensaries in Los Angeles over the past two years.
As part of his journey, Doug smokes, eats and vaporizes medical marijuana for thirty consecutive days in order to get “Super High.” But there is a catch–first Doug must go thirty days without any marijuana and undertakes a number of tests, completing the same tests while medicated and while sober, in an effort to find out what marijuana does and how it really affects people. Along the way, we follow Doug as he goes out on the road to stand up gigs across the country and hangs out with fellow comedians Sarah Silverman, Bob Odenkirk and Patton Oswalt.
Alex Campbell put together a committee of scientists, academics, doctors, debunkers, psychologists, lawyers, professional comedians, dispensary operators and medical marijuana patients who designed, implemented, and interpret the results of the rigorous examinations that Doug goes through in the course of the movie. Along the way, it was always stressed that this was an experiment with a little “e”. Alex also asked the Governator, the Attorney General, the DEA, the ONDCP, the FDA and the LAPD and the OPD to be part of the experiment but they all said no. All of the results of the tests that Doug took were compiled and a report was published and a meeting was had to discuss the findings. At the Oversight Committee meeting, it was revealed to us that Craig X had done a similar experiment with LSD. 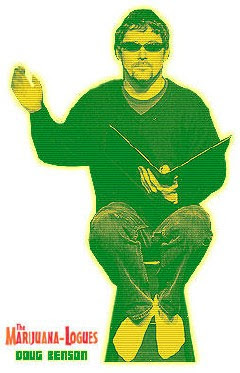 Everything Doug Benson did in Super High Me is legal in California. Benson claims that he tells kids “you should not smoke pot until you become a professional comedian”.
Best of Organic Roses,
Gianni French
mystrawhat.com myspace.com/mosshead7
Posted by My Straw Hat at 8:55 AM