PSU Football: Lions roar into BCS poll; Ranked No. 3 behind Texas and Alabama 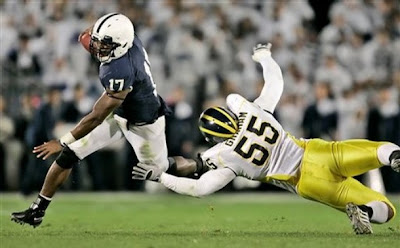 UNIVERSITY PARK, Pa. -- The season's first BCS standings were released yesterday.
There were no big surprises, at least not among the top three. Texas, Alabama and Penn State debuted at 1-2-3, the same way all three teams are ranked in The Associated Press and USA Today coaches' polls.

Penn State coach Joe Paterno, whose Lions will play at Ohio State Saturday, said after this past Saturday's 46-17 demolition of Michigan that he wouldn't pay much attention to the BCS standings.

"I mean, it's fine. It's good for the fans, because it gives you guys some things to talk about, write about and everything else. But, honest to God, I don't even want to talk about that.

"I just try to steer them in on what we got to do to win the next game. I mean, I don't even look at those things. And there's not something I could do about it."

The Buckeyes, who have lost in the past two national championship games, are No. 9 in the BCS rankings.

"They mean a little now, but not much," Penn State kicker Kevin Kelly said. "There's five games left and that's when it's all going to matter."

The BCS formula consists of three components, each weighted equally: the USA Today Coaches' Poll, the Harris Interactive College Football Poll and an average of six computer-based rankings.
The final standings determine which teams will meet Jan. 8 at Dolphin Stadium in Miami to decide the national title.

"It's getting easier to stay focused," Penn State wide receiver Jordan Norwood said. "Because we can see how close we are to really reaching our goals. And we want to make sure we reach them."