Beyond interesting look at a Prince denouncing his family's titles and materialism and working as a frontier Catholic priest in the Allegheny Mountains of western Pennsylvania and neighboring areas. The author accomplishes providing the reader with both correlating local and worldly insights and historical accuracies of Prince D.A. Gallitzin' s time.

While reading "PRINCE GALLITZIN and the Lost World of American Catholics: 'the prince-priest' D.A. Gallitzin (1770-1840): a historical novel & popular history" just after reading a book on St. Francis Assisi I was stricken by the obvious life as Servant of God similarities and also the supernatural recognition from animals and people that will hopefully inspire a scholar to write about them once the Prince-Priest: Apostle of the Alleghenies (Father D.A. Gallitzin / AKA "Father Augustine Smith") is canonized as one of America's first  saints.
John Alan Conte` Jr. 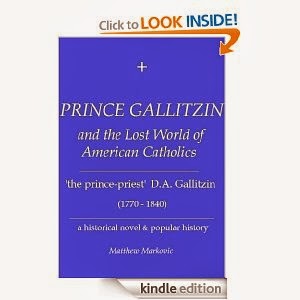 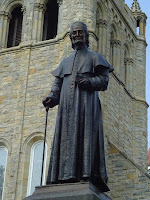 Loretto was founded in 1799 by Father Demetrius Augustine Gallitzin (statue at right) as the first English-speaking Roman Catholic colony west of the Alleghenies. Located 18 miles SW of Altoona and northeast of Johnstown, Loretto is home to St. Francis University (est. 1847), one of the nation's oldest Catholic institutions of higher learning. But it was two generous men - Father Gallitzin and Charles Schwab (a century later) - who transformed a backwoods Allegheny village into a place of remarkable importance to American Catholics. Two extant structures remind us of Loretto's extraordinary history.

Basilica of St. Michael the Archangel 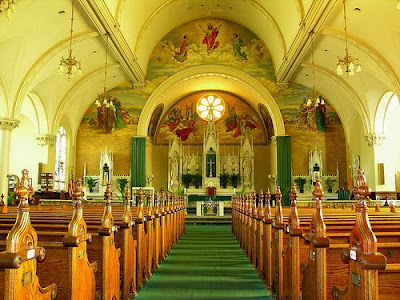 The current stone Basilica, which stands adjacent to the site of Father Gallitzin's original log church, was built in 1901 with funds donated by Charles Schwab (then president of U.S. Steel), who was raised in Loretto. The architect was Pittsburgh’s celebrated Frederick J. Osterling, who designed the Romanesque church with a massive stone bell tower above the main entrance. There were notable Gothic details incorporated into the design. All the exterior sandstone was locally quarried, and the interior boasted barrel vaulted ceilings adorned with frescoes, all without visible post or column supports. The roof was surfaced with red paving tiles. Extravagance and fine craftsmanship abound. The elaborately carved pews were made from polished quartered red oak, and a 70-ft. long communion rail was fashioned from Mexican onyx. The four altars, all imported from Italy, were carved from Carrara marble, the same stone from which Michelangelo's Pieta was carved. In today’s value the $150,000 original cost converts to more than 4 million dollars.

An elaborate 3-manual organ (J. D. Didinger, Philadelphia) with stenciled façade pipes was placed in the rear gallery as a gift from Andrew Carnegie; costing $8,000 at the time, the organ was the only major expense not covered by the Schwab family. Carnegie, who was passionate about organ music, fully or partially funded more than 7,800 pipe organs during his lifetime. 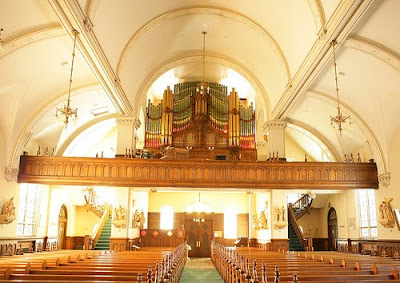 Schwab, whom Carnegie considered a protégé, had worked his way up from the lowliest ranks at Carnegie’s steel mills, where he began as a stake driver and blast furnace operator, and Carnegie’s generous contribution to St. Michael’s reflected his high regard for Schwab. Unfortunately, after a meteoric rise in fortune and prestige, Schwab eventually lost nearly everything in the stock market crash of 1929 and died bankrupt in 1939. Schwab was interred in a neoclassical mausoleum on the grounds of the Basilica's cemetery, and Gallitzin's grave is located between the present church and the adjacent site of the 1799 log church. 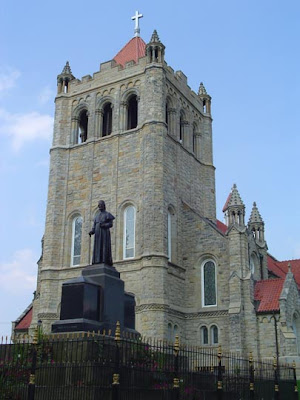 The basilica, which seats 1,000 worshipers, was renovated in 1959 and again in 1993-94. On Sept. 9, 1996, Pope John Paul II raised this parish church of St. Michael to the status of a minor basilica. In 2007 a Mass was celebrated at the Basilica of St. Michael the Archangel to recognize the nomination of Gallitzin for sainthood, only the eight American Catholic so honored. 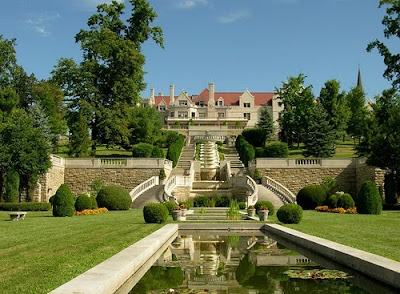 Charles Schwab, a steel industrialist, was raised a Catholic in Loretto from the age of five and always considered it his home town. Schwab even named his $100,000 private railroad car “Loretto,” which is today on display in Altoona’s Railroaders Memorial Museum. Schwab was a graduate of St. Frances University in Loretto. His 44-room summer home, a 1919 mansion he called Immergrün (“ever green” in German), sited on a hilltop in Loretto, is now home to the Mount Assisi Monastery (Franciscans, Third Order Regular), which offers public daily access to its celebrated gardens from dawn to dusk. A stunning stair-step cascading fountain forms the centerpiece of the estate grounds. The sunken gardens also contain a shrine to Fatima, which is visited by throngs of the Catholic faithful on the 13th of every month. In the 1920s Schwab employed 70 full time servants to staff his summer estate, which he lost just after the stock market crash of 1929. 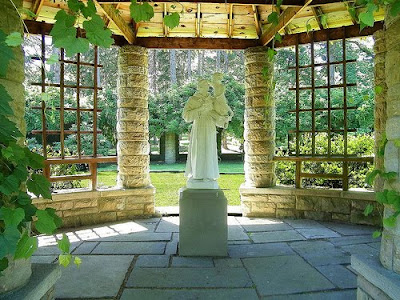 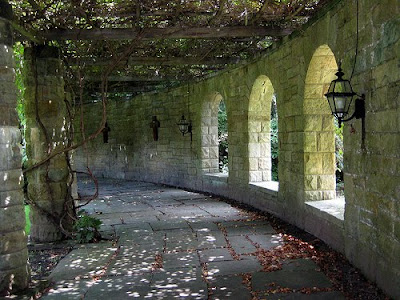 Directions: From Bedford, PA, travel north on Rte. 220 for 31 miles; at Hollidaysburg merge left at exit 28 onto west Rte. 22; after 9 miles take the Cresson/Summit exit, turning right onto Adm. Peary Hwy. After crossing the Cresson railroad tracks, bear slight right onto St. Joseph St.; after 4 miles St. Francis University will be seen on the left in downtown Loretto; turn left onto State Rd. 1001, Manor Dr., then a quick right onto St. Francis Street. The Monastery and gardens are on the right.

Loretto is an easy hour's drive north of Bedford, and the Bedford Springs Resort and Spa makes an excellent base for exploring this part of western Pennsylvania; Frank Lloyd Wright's Fallingwater is one hour and forty minutes by car from Bedford Springs.www.omnihotels.com/FindAHotel/BedfordSprings.aspx

Father Demetrius Gallitzin (1770-1840) pronounced “GAL-it-sin,” was born a prince in the Hague, where his father served as the ambassador of Catherine the Great to the court of the Netherlands. The Gallitzins were a princely family of Lithuanian descent who figured among the nobility of the Russian Empire. Gallitzin's mother, Amalia von Schmettau, was a Countess of German birth. Young Gallitzin left his home in Germany at the age of 21 to see the New World, since the more typical aristocratic Grand European Tour was not an option, because much of Europe was embroiled in wars at the time. His mother had arranged for Father Brosius to be her son’s personal chaplain and escort during his journeys through America.

When they arrived in Baltimore in 1792, local Bishop John Carroll was less than pleased; he desperately needed German-speaking priests, and this one was tied up escorting a rich tourist. Carroll made the best of it by offering Gallitzin a place in his year old St. Mary’s Seminary (est. 1791 in Baltimore) as one of its first students; three years later, at age 25, Gallitzin found himself ordained as the first priest ever to receive all of his Orders (major and minor) for the Priesthood on U.S. soil. The Archdiocese of Baltimore was the first diocese established in the country (1789), and John Carroll its first bishop; the state of Maryland had been founded by a Catholic – Cecilius Calvert, the second Lord Baltimore. At the time this Archdiocese included all of the territory of our nation’s original thirteen states.

Soon thereafter Gallitzin found himself traveling 150 miles on horseback to the western frontier (now southwestern Pennsylvania), to attend the call from a non-Catholic woman who was deathly ill and requested a visit from a priest. He gave her last rites, and she died a Catholic. Father Gallitzin asked Bishop Carroll to be able to relocate to serve the people of McGuires’s Settlement, as Loretto was then known. Because the local citizenry was unable to support a priest, Father Gallitzin used his personal funds to build a church of white pine logs in 1799, thus founding the Catholic colony of Loretto, which he named (note variant spelling) after the famous Shrine of Our Lady of Loreto, Italy.

Gallitzin set about baptizing children and many adolescents, as well, because there had been no priest present when they were younger. Indeed, many of the Catholics in this pioneer area had never seen a priest. In the decades that followed, Gallitzin transformed Loretto into the cradle of Catholicism in western Pennsylvania. Again, using his own money, he purchased large portions of land, which he sold in small tracts at a low price or often at a loss. He financed the construction of saw-mills, grist-mills and tanneries, and established other industries for the benefit of his flock. In so doing, he attracted more than four thousand residents to his Catholic colony (Loretto’s present population is fewer than 1,500). Father Gallitzin served the people of this area for forty years until his death in 1840, when he was buried on the grounds of his beloved log chapel.