"Excuse me while I kiss the sky!" 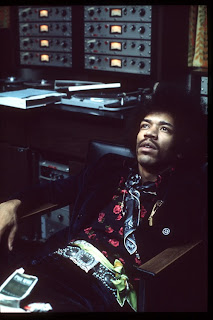 Jimi Hendrix did not cultivate an image of someone to be feared that is a violent offender.

And even although Nixon paranoia dictated that white American fathers should be suspicious & fear Jimi Hendrix and his cult of personality because he was part of the "counter culture" movement you did not fear him as a menacing young black male.

And, correlating evidence with this notion is that to people under 30 at that time of Jimi  Hendrix was a sign & symbol of "freedom" ... freedom to break-on-through-to-the-otherside and empower & enlighten people with a most incredible kind of guitar playing, music, songs, lyrical poetry.

Transcending race is something that Jimi did and still does. .. because he cultivated that image and lived it. .. so, until this day, Jimi Hendrix transcends race. 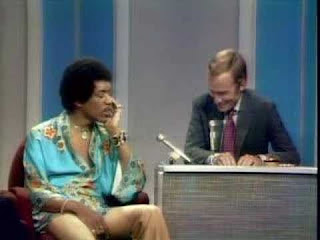 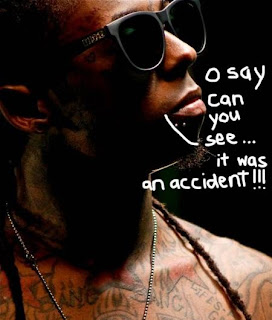 In comparison to a transcendental image such as Jimi Hendrix is just about any current rapper in the music industry of today and post RUN DMC era when rap music was poetry of the streets as an observer (an artist/poet) and new ways of life bringing people together for one hell of a good party with dancing, DJ #love, and getting high off of a new brand of life represented in movies like #KrushGroove #Breakin' #BeatStreet
Lil' Wayne had a BIG problem on Monday after video of the hip hop artist surfaced showing him not only dropping an American flag on the ground but then REPEATEDLY stepping all over it!
Oh Weezy. No, no, no!
The video sparked an uproar on the internet with many calling Lil Wayne's performance downright unpatriotic. Now, he's saying that's just not true! Lil Wayne tweeted out


Well, this is sure to outrage someone!

While shooting the video for his upcoming single God Bless Amerika, Lil' Wayne used a a giant American flag as backdrop for one of the scenes and as soon as the cameras began rolling, the American flag fluttered down to the ground and the 30-year-old entertainer began trampling all over the sacred symbol while spewing lyrics about the decline of our great nation. ..

Sure, this may have been an accident however crafting an image in the American media of being a "hard core" rap artist is not!

DMX – Rob All Night
[Hook: repeat 2X]
If I'm gonna rob, I'mma rob all night (yeah!)
If I'm lookin' for something' then it's probly a fight
If I'm gonna fuck bitches then they better be tight
If that's dead, then the head better be right (C'mon)

[Verse 1]
Here we go again, fuckin right
Dog man X baby, dog for life
Know how this shit go, built off fights
Bitch dog be like "AIGH, AIGH, AIGH"
OOH, this rap shit be getting kinda hectic
It's not a game nigga, cats don't respect it
Real shit's been neglected for far too long
Let's get it on!
I jump off slugs like packages from UPS
But you run when you see X
Pull out the front when you see Tex
POW, the light is what you see next
Fuck who you listenin' to, I'm the badest
Any niggas in the industry is faggots
Due alone niggas don't want no static
Whent hey say who shot J R it won't be Dalas

[Verse 2]
Y'all niggas don't know how the dog livin'
No matter what I do I keep on winnin'
Can't stop me now. It's just the beginning'
Gon' be there 'till the endin'
In 2005 you won't know
Stop, drop, open up shot, let 'em go
Hit 'em with the same flow I hit 'em with before
This time I'm goin' around the back door
Got me like "GOD!" you niggas is stupid
Get the drum crack 4 bars, horn then loop it
Same shit that you did to me, took what you did
Got niggas movin', but not institution
Dog done did it again, uh uh (WHAT?)
Dog is in it to win, uh huh (WHAT?)
Dog did a nigga and then, uh huh (WHAT?)
You thought dog was afraid? Nah ah (Come on)

[Verse 3]
My niggas, some niggas you don't wanna try
But then again, I be that one to bust a nigga in his eye
I don't give a fuck bitch all my niggas ready to die
Hit you with the things so you niggas ready to fly
You don't want no more
Bring all ya got to even the score
E5 is HOT? You want more?
You really don't know what you're askin' for
Listen old man, don't do that
We all dogs over here, don't act like a cat
We like, touch balls, round table with a bat
Start with the cheers, "Crack, crack, crack!"
[Hook]  DMX – Rob All Night

Wiz Khalifa – I'm Gonna Ride
[Verse: 1]
See a nigga well known for switching states
Macking broads, getting cake
Glock and mad, cock and blast
Thrown a bitch nigga for a quick escape
I move with dudes that be dishing weight
Smooth with the uz that will hit your face
Came in the game and I'm changing the game
With a flow that will run around the crews that hate
This guy is a pimp and you know his fam
I don't hold the grams, I'm a colder man
And I do it for the youngers and the older fans
Niggas whippin in the kitchen just to hold their grams
I don't play around, lay em down
For the lil' homie wanna' play the clown
I'm casing pounds, spraying rounds
Follow the leader cause it's going down
Money in the rubber band slangin' crack rock
Try and find the man in the flat top
Ask anyone in the streets
Everyone around knows Wiz a beast
And I'm killing the beef you can chill in the team
Pull the steel and release, I’m up in your brain
You bet on me taking the loss, you better be upping your change
See this guy here is a nuisance, you talk fire and you can't prove it
You just lie up in your music, send my guys to come and shoot shit
Duke I ride and this is true as you would die if niggas pulling
I don't know what you fucking see
When you know as well you've been fucking me

[Verse: 2]
P. I. T. T. S. B. U. R. G. H. represent to the fullest
And I'm putting cowards back into place when I'm rapping the taste
Yeah crack in the place, laugh in your face
Lay up and chill after you safe that's a mistake
Cause I'm moving with a gang of ill guys looking like
The last of the day but why you say
Cause my nigga I could die today lock down
And never see the light of day
Kidnapped trapped in a hide away
So I never get the cat to ride away fire inside of
May the kid move with da fools that try to take
The game back to the rhyming days payback
For the fact that your guys a fake and I can't even believe
You can spit shit to the people like it
Chips and just leaves you with kids, that leaves
You see through you pricks, hand my shit an overdose
So you wrote and sold some coke, move some crack
How true is that. Front on my cats and you'll lose shit back
Haters get stacks when I'm through with rap
And I'm filling my tracks with truth and fact
Kill em on wax and I'm moving cats
When they crew in all black yeah I'm doing that
I gotta flavor that will flow and taste
And I'm doing it till I'm blue in the face
I'm thinking bigger then any nigga that think
He cool in the place which gives me reason
To but a tool to his waist
[Hook]
http://rapgenius.com/Wiz-khalifa-im-gonna-ride-lyrics

It's almost an injustice that young black kids are sold this image, this lifestyle, this music as their music, their lifestyle, their image ... "I am and I'm gonna! ! !"

@SteveKornacki @mayawiley @Toure good conversation #Maya insights as to media "priming" an image of a young black men are interesting yet ..
@NewEdayMedia 57m
@SteveKornacki @mayawiley @Toure interesting that modern rap music does the same kind of "priming" of that same image = "i'm gonna! I am!"..
"Music doesn't lie. If there is something to be changed in this world, then it can only happen through music."
Jimi Hendrix