WE all should get to know these names too and ever so closely follow their names too and follow what they're up too --- As a matter of fact, only the Chinese authorities seem to know where Teng Biao is = (super creepy) ... 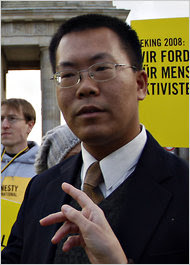 Teng Biao, a lawyer, is being held incommunicado by Chinese officials.

One of a handful of lawyers in China pressing for human rights and the rule of law, he has been repeatedly detained, beaten and threatened with death.

But this latest spell of detention — he has been held by Beijing security officers for three weeks, with no word from him or his captors — has struck a new chord of anxiety in his wife and friends.

"This time is really strange," said his wife, Wang Ling. "In the past, they held him only a few days, and we knew for what reason. But this time, I've been told nothing. No news, no calls, no result so far. I have no idea at all."

Mr. Teng is one of many prominent rights defenders and advocates who have disappeared and are being detained, some with no legal authority, in what critics say is one of the harshest crackdowns in many years. The detainees' relatives and supporters say previous periods of confinement did not last this long and in such total silence. The crackdown is part of a broader push to enforce social stability that has grown more intense in the past three weeks.

This is an especially uneasy time in China, with anonymous calls for a "Jasmine Revolution" similar to the uprisings in the Middle East popping up on some Chinese-language Web sites. That has coincided with the annual meetings of the National People's Congress and a consultative legislature in Beijing. Security officers have also clamped down on foreign journalists in the strictest such action in recent memory.

Are there like any crazy adrenaline junkies that have or are surfing this "100 year storm" in Hawaii or California, Baja? ...like Point Break?

The Hydroponic Dreams of Laird Hamilton 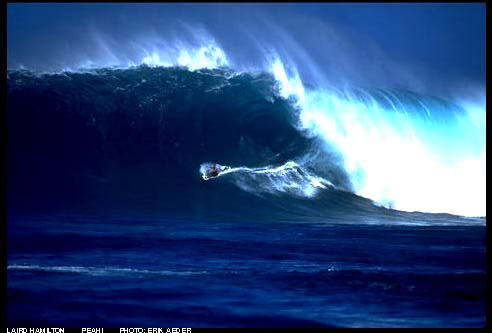 He was born in a bathysphere, baptized in surfboard resin, raised in the rainforest in Hawaii. Who else is ready to ride the biggest wave on earth?