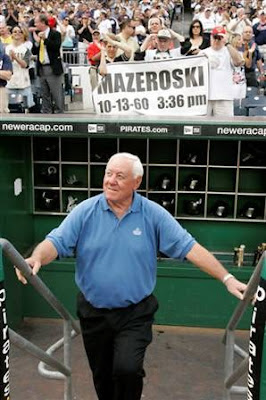 PITTSBURGH - For one night, it was 1960 all over again for the Pittsburgh Pirates.
Jose Bautista and Ryan Doumit homered and the Pirates turned back the clock nearly a half-century, beating the New York Yankees 12-5 on Tuesday night for their first victory against them since Bill Mazeroski’s historic homer decided the ’60 World Series.
The Pirates had been the only team in the majors to not beat the Yankees in a regular-season game, getting outscored 49-19 while losing six in a row against them in 2005 and 2007. Until Tuesday, the Yankees hadn’t played a game that counted in Pittsburgh since 1960.
Continue w/ full story ... (just click on these words) ...
Best of Pittsburgh's Rusted Roses,
Giovanni "Wyoming" French
mystrawhat.com
myspace.com/mosshead7
http://theneweverydaymedia.blogspot.com/
Posted by My Straw Hat at 8:24 AM