President Bush's plan to finally bring everybody together across all boundaries & end his presidency on a good, harmonic note.............

FishBowl D.C. has reported that before President Bush's last day in office - January 20, 2009 -he plans on a coast to coast "goodbye" tour where he will give one of his final speeches as President and then "close" with "Send Me On My Way." 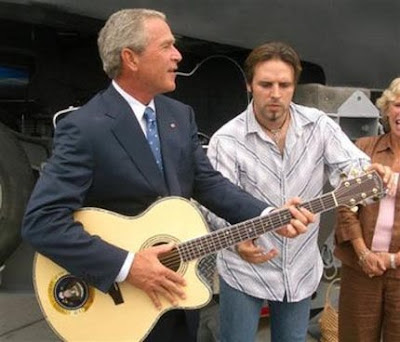 As seen here with his guitar with the special "Presidential logo," CNN's White House Correspondent, Suzanne Malveaux ,reports that President Bush has already begun practicing for his tour and sings Rusted Root's Send Me On My Way everyday.

Malveaux states that President Bush became familiar with the song the season the Texas Longhorns won the Rose Bowl --- Apparently, fellow Austin Texas celebrity, Matthew McConaughey, and President Bush often followed the Longhorns together and Matthew was quite superstitious about listening to one of his favorite "jam bands" sing its extended version of his favorite song "Send Me On My Way" before every single game.

President Bush immediately caught-on and was quoted as saying it was one heck of a catchy tune. McConaughey often sat in on bongos while Lance Armstrong's at-the-time-girl-friend, Sheryl Crow, was the President's official guitar tutor responsible for teaching him this song.

Both Malveaux and FishBowl D.C. have repeatedly tried to reach Rusted Root for comment however its management continues to insist that they are currently at a secret location recording the final touches for its highly anticipated upcoming studio release and also practicing for its upcoming summer tour 2008.

President Bush genuinely feels this is something that will finally bring everybody together across all boundaries and end his presidency on a good, harmonic note.

Best of Organic Roses, Giovanni French
mystrawhat.com $$$$$$$$$$$$ myspace.com/mosshead7
http://theneweverydaymedia.blogspot.com/
Posted by My Straw Hat at 11:51 AM