Why in the World Doesn't Volvo Use "Safety Dance" song by Men-without-Hats for an Awesome Commercial Already??? 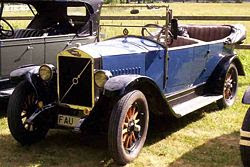 Volvo ÖV 4 was the first car built by Volvo. The designation ÖV4 stands for , "Öppen Vagn 4 cylindrar" in Swedish, which means Open Carriage 4 cylinders. The model ÖV4 was often referred to as "Jakob" but that was just a name for one of the 10 pre-series ÖV4 that was ready on July 25 (John French's birthday) Jakob's name-day. All 10 prototypes were assembled in Stockholm at the company AB Galco, Hälsingegatan 41 where Gustav Larson worked at that time. Only one of the 10 pre-series cars manufactured during 1926 was saved for posterity and is housed in Volvo Museum, in Gothenburg, Sweden.

Volvo means 'I Roll' in Latin, and the arrowed Circle is merely the conventional map sign for steel - Sweden's most famous industry before iKEA came along. The circle and arrow represent the shield and spear of Mars, which are also an alchemical symbol for iron. Each of the "classical" planets was associated with a metal: Sun=gold, Moon=silver, Mercury=quicksilver, Venus=copper, Mars=iron, Jupiter=tin, Saturn=lead.

On May 11, 1915 AB Volvo submitted an application to have the trade mark 'Volvo' registered as a name for several different products. Then on July 25, 1924 when Gustaf Larson andAssar Gabrielsson met by chance over a plate of crayfish, and after enjoying their meal agreed to start up production of 'The Swedish Car'.

The $81 million dollar Volvo Safety Center is the most technologically advanced crash-test facility in the world.

Stockholm, Sweden; October 2000 -- "In our new crash safety laboratory, we will have capabilities far superior to those of the competitors. We can quite simply move the reality of the roads into our crash laboratory" said Stefan Nilsson, Director, Volvo Cars Safety Center.

There is no such thing as a typical accident. Real-world accidents do not always happen at a fixed speed or at a perfect 90 degrees. In an industry first, Volvo Cars new Safety Centre takes real-world factors into account, enabling engineers to crash test cars moving at any speed up to 100 kph (62 mph) and at any angle, from full head-on to a 90-degree broadside collision