Water Running Robot
A robot that can run on the surface of water. 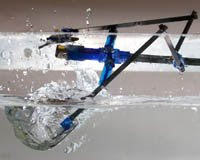 Goal: : Developing a robot which can run across the surface of water in a fashion similar to the Basiliscus basiliscus and other water-running lizards.

Approach: First, mathematical models of the lizard's interaction with the water are used to develop similar models for robot bodies and legs. A simple four bar mechanism has been adopted as the robot's propulsive mechanism. Proof-of-concept systems and supported prototypes are constructed to confirm and improve the mathematical models. Scale prototypes are constructed, and their lift and forward thrust abilities are measured. Through several iterations, improvements to the system are affected, and the overall system design may diverge (in appearance) from nature.

Benefits: Lizards that run across the surface of the water do not have to deal with the negative effects of viscous drag, like most swimming animals and boats. A robot that moves in a similar manner may be a more efficient way to travel across the water. Also, we wish to increase our understanding and extend the abilities of legged robots.

Current Status: Water running robots with on board and off-board power have been built which are capable of running across open water in outdoor environments. Work is being done to construct control and steering systems for more autonomous, untethered robots. New designs with higher degrees of freedom are being prototyped to allow for steering while water running. Amphibious designs are being researched. 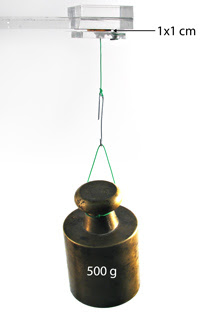 Introduction: Nature can be an inspiration for innovations in science. One such inspiration is comes from the gecko lizard which can climb on walls and ceilings of almost any suface texture. Rather than using it's claws or sticky substances, the gecko is able to stick to smooth surfaces through dry adhesion which requires no energy to hold it to the surface and leaves no residue. The dry adhesion force comes from surface contact forces such as van der Waals forces which act between all materials in contact.
The gecko's trick to sticking to surfaces lies in its feet, specifically the very fine hairs on its toes. There are billions of these tiny hairs which make contact with the surface and create a huge collective surface area of contact. The hairs have physical propeties which let them bend and conform to a wide variety of surface roughnesses, meaning that the gecko's secret lies in the structure of these hairs themselves. By studying this structure, we are able to mimic the biological structures with synthetic materials.
The structure of the biological gecko hair is very complicated as well as very miniscule. Each hair is made from multiple sections, a micro-hair which is roughly 5 microns in diameter, and atop each of these micro-hairs sit tens to hundreds of nano-hairs which are 200 nanometers in diameter (1/250th of a human hair) in a tree-like branching structure.

By using our Force Characterization Systems we are able to get immediate feedback from our gecko hair samples, therefore we can rapidly evolve our designs to reach an optimal design. Benefits: The new synthetic adhesive will have countless uses from space exploration robots to surgical applications to post-it notes. This reusable, self-cleaning adhesive material can be thought of as a one sided velcro which can stick to almost everything.
Videos:
Video 1: 30um diameter polyurethane fibers attaching to a curved glass surface.
Members: Mike Murphy, Seok Kim, Burak Aksak, Metin Sitti 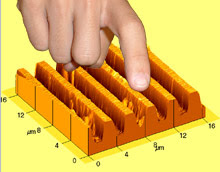 Benefits: With a 3D computer simulation coupled with realtime force feedback, an AFM can become a nanomanipulation tool where a user can interact with nano-size entities as easily as if they were lagre objects on the desk in front of them. This expands the utility of the AFM from simply a scanning device to a manufactuing tool with which one can assemble structures that are virtually impossible to build presently. Furthermore this system can allow novice users with little training to utilize the advanced capabilities of the system and become intuitively familiar with nano-scale physics.
Videos:
Video 1: Low quality [1.9 MB]Video 1: High quality [7.2 MB]
Members: Cagdas Onal, Onur Ozcan, Chytra Pawashe, Metin Sitti