There’s never been a game like this in NFL history: Steelers beat Chargers in NFL’s first 11-10 game 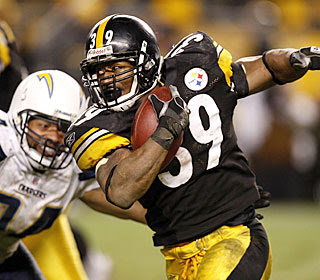 PITTSBURGH (AP)—There’s never been a game like this in NFL history.

The bizarre 11-10 final score was fitting because the Chargers still haven’t had the regular-season finish they want in Pittsburgh: a winning one.

Ben Roethlisberger stayed away from the mistakes that cost the Steelers their previous two home games, Willie Parker ran for 115 yards and Jeff Reed’s third field goal won it—a 32-yarder with 11 seconds remaining—as Pittsburgh rallied to beat the Chargers on a snowy Sunday.
The first such score in 12,837 NFL games was in jeopardy when Troy Polamalu returned an errant lateral 12 yards for an apparent touchdown on the final play. The play was overturned on review—it was called an illegal forward pass—and the 11-10 final was restored.

After the game, referee Scott Green said the officials realized afterward the touchdown should have counted, though it wouldn’t have affected the result.

“It was weird,” Steelers receiver Hines Ward said. “We definitely have to work on our offense. But this game is about wins and losses, and we won.”

The only thing perfect on a snowy, frigid day when the weather and the offenses were equally awful was San Diego’s regular-season record in Pittsburgh. Make it 0-13.

“I like playing on grass, mud, anything that slows down an offense,” said linebacker James Harrison, who made a series of key plays.

Best of the Roses, Giovanni French