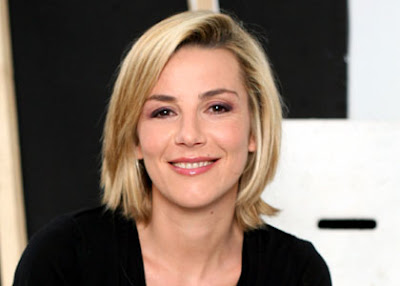 Headlines: Flirting for France: Newly-divorced Sarkozy's 'close and loving relationship' with the blonde TV star in a low-cut blouse 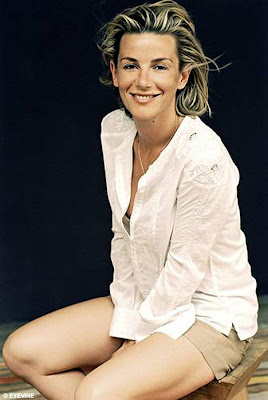 The pair have been spotted enjoying candlelit meals, and Miss Ferrari, 41, is a frequent visitor to the Elysee Palace,Mr Sarkozy's official residence in Paris.
The blonde enjoyed a one-on-one live interview with Mr Sarkozy, 52, in March ? when he was running for the presidency before his electoral triumph in May ? and the "incredible chemistry between the two" was apparent to many TV observers.
"They were both flirting for France," said a source at Canal Plus, the TV channel where Miss Ferrari works.
"Laurence wore a low-cut black blouse and Sarkozy loved every minute of it. They got on like a house on fire and have been seeing each other ever since. Both are single people, so they have every right to enjoy each other's company.
"They appear to have a close and loving relationship. Laurence would make a fantastic first lady. Sarkozy is a very lucky man." 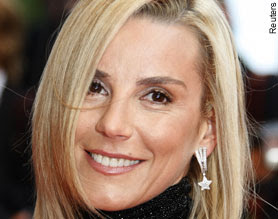 The recent fashion for comparing Nicolas Sarkozy to Silvio Berlusconi seems to me far-fetched. The French president has been all his life a political animal and never a businessman, but he does share some traits with the Italian mogul-Prime Minister.

One of these is a desire to control the media. Unlike Berlusconi, Sarko does not own any, but he has good friends who do.

Today we've seen Sarko get his way once again with France's most powerful media outlet, TF1 television. The network, owned by Martin Bouygues, is reported to be ousting Patrick Poivre d'Arvor, a national institution who has presented its main news for the past 21 years. Regulars here will remember the hatchet job against him by colleagues in a book last January.

The grand anchorman who is known simply by his initials PPDA, is to be replaced by Laurence Ferrari, 41, one of the most glamorous French newswomen and friend of Sarkozy. For France, the removal of PPDA is very big news, as you can see from the two front pages below.

The over-used word icon can be applied to the inoxydable (rustproof) news presenter. With his quirky confessional style, he still wins by far the biggest audience for his 8pm Journal Télévisé (28 percent of an increasingly fragmented market). But at 60, PPDA is a little the worse for wear -- despite his numerous hair transplants. The competition is creeping up fast and TF1 wants to claw back younger viewers.

This "high mass" of French news, as it is often called, offers soft fare, much of it bordering on info-tainment. The leftwing opposition has long called it "télé-Sarko" because it tends to be kind to the man in the Elysée Palace. But the slightly impertinent tone of Poivre d'Arvor has nevertheless managed to irritate Sarko on numerous occasions. After his election, Sarko's deputy campaign manager became vice-president of TF1, which has largely renewed its top management. Last autumn, before the divorced President took up with Carla Bruni, he was reported on celebrity gossip sites to be dating Ferrari. Closer, a celebrity magazine, was ordered to pay 15,000 euros damages for breach of privacy when it reported a supposed romance between the two. According to Libération today, Sarkozy recently told TF1 bosses that he wanted to see PPDA replaced by her. [Libé's jokey headline below reads PPDA run over by a Ferrari]

As well as being the beautiful reporter from central casting, Ferrari is respected in the trade as a serious journalist but she is not known as a hard-hitting interviewer. I doubt that Sarkozy need worry about any impertinent questions.

Best of the Roses, Giovanni French