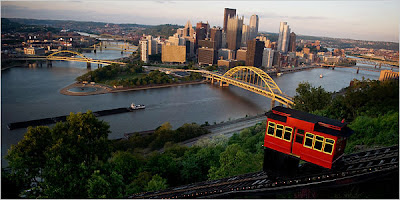 By JEFF SCHLEGEL
Published: July 6, 2008
Friday
4 p.m.
1) GRIDIRON AND STEEL
Get to know what makes the city tick at the Senator John Heinz History Center (1212 Smallman Street; 412-454-6000; http://www.pghhistory.org/), which chronicles the city’s past and present glories from United States Steel to the Pittsburgh Steelers. This is actually a two-fer: the main museum is devoted to everything from the Heinz food empire to the polyglot population. The upper two floors are occupied by the Western Pennsylvania Sports Museum, which pays homage to the region’s rich sports heritage. It’s hard to miss the seven-story brick warehouse building; look for the giant photograph of the Hall of Fame running back Franco Harris.
7 p.m.
2) WATERFALL DINING
The martini menu almost changes as often at the seasonal specials at Soba (5847 Ellsworth Avenue; 412-362-5656; www.bigburrito.com/soba), a pan-Asian restaurant with a Victorian exterior and a Zen-like interior that features a two-story wall of cascading water. The menu includes a rock-shrimp tempura lettuce wrap ($11) and pan-roasted Alaskan halibut ($30). The wine list is extensive, as is the variety of over 20 sakes. The vibe is upscale and trendy, but not in an overbearing way. If you arrive early, grab a special martini, perhaps made with ginger-infused vodka, on the rooftop deck.
10 p.m.
3) BRILLO PAD
Brillobox (4104 Penn Avenue; 412-621-4900; http://www.brillobox.net/) feels like an arty East Village bar — little wonder, considering the 30-something artist couple who own it are former New Yorkers. They came back home to Pittsburgh, they said, to contribute to the city’s growing arts scene. Art film screenings, spoken-word performances and live music are held upstairs in a room decked out in velvet wallpaper and murals. Or just hang loose in the downstairs bar with its atmospheric red lights and an eclectic jukebox that has Goldfrapp, Patsy Cline and Snoop Dogg.
Saturday
10:30 a.m.
4) NOSH ’N STROLL
By night, the formerly industrial Strip District is filled with partygoers bouncing between bars and clubs. But on Saturday mornings, the parallel thoroughfares of Penn Avenue and Smallman Street (roughly between 16th and 26th Streets) are turned into a sprawling outdoor market with international food kiosks that serve Middle Eastern kebabs, Italian sausages and Greek baklava. Shop for produce, clothing and vintage knickknacks as accordionists and mariachi bands provide a festive soundtrack. Take a breather with a cup of coffee and a mele, a fruit-filled pastry, at La Prima Espresso Company (205 21st Street; 412-565-7070), where the old men sitting at the outdoor tables look like they’ve been sipping espresso and playing cards for eternity.
1 p.m.
5) NO BEDS HERE
You can probably find the Andy Warhol Museum (117 Sandusky Street; 412-237-8300; http://www.warhol.org/) on your own. For more radical contemporary art, beat a new path in the Mexican War Streets neighborhood to the Mattress Factory (500 Sampsonia Way; 412-231-3169; http://www.mattress.org/; admission $10). Housed in a former mattress factory, the museum is dedicated to room-size art installations. Current exhibitions include “Instant Before Incident,” a riveting sculpture by the Italian artist Luca Buvoli that depicts a vintage Fiat in stop-action motion, as it seems to hurl out the window.

Map Pittsburgh, Pa.
3 p.m.
6) HARD TO FIND ITEMS
Some of the city’s funkiest shopping can be found in the 16:62 Design Zone, which spans the Strip District and Lawrenceville. It has more than 100 locally owned shops that focus on design, home décor, contemporary art, clothing and architecture. Among the more interesting is the nonprofit Society for Contemporary Craft (2100 Smallman Street; 412-261-7003; http://www.contemporarycraft.org/), a gallery and store that showcases handmade crafts like shiny metal handbags ($300 to $500) and recycled steel cabinets (from $3,500).
6 p.m.
7) GRAB THE CAMERA
The best views of Pittsburgh are from Mount Washington, and the best way to get there — or at least the most fun — is up the Duquesne Incline (1220 Grandview Avenue; 412-381-1665; http://www.incline.cc/; $4 round trip). One of two surviving hillside cable cars from the 1870s, it takes three minutes to climb 800 feet to Grandview Avenue. There’s a neat little history museum that has old newspaper clippings, but the real spectacle is the view of downtown Pittsburgh, where the Allegheny and Monongahela meet to form the Ohio River.
7:30 p.m.
8) CITY UNDER GLASS
While you’re up there, Grandview Avenue is also home to a cliff-hugging restaurant row. For amazing seafood to go with the river views, make reservations for the Monterey Bay Fish Grotto (1411 Grandview Avenue; 412-481-4414; http://www.montereybayfishgrotto.com/). This tri-level restaurant sits atop a 10-story apartment building. Jackets aren’t required, but nice clothes are apropos. Fresh fish is flown in daily, and the menu reflects whatever is fresh. On a recent visit, the specials included a charcoal-grilled Atlantic salmon with fresh peppered strawberries in a red-wine sauce ($26).
9 p.m.
9) OFF DOWNTOWN THEATER
Generally regarded as Pittsburgh’s most innovative theater company, the City Theatre (1300 Bingham Street; 412-431-2489; http://www.citytheatrecompany.org/) does challenging plays that aren’t likely to be staged in the downtown cultural district. The theater, in a pair of former churches, has both a 272-seat mainstage and a 110-seat house. A production of “The Wonder Bread Years,” a comedy written by the former “Seinfeld” writer Pat Hazell, starts on July 10 ($35 and $40). Recent productions have included works by Adam Rapp, Christopher Durang and Jeffrey Hatcher.
11 p.m.
10) PUB MARATHON
Venture over to East Carson Street, by some counts the country’s longest continuous stretch of bars. It’s all there, from shot-and-beer joints to trendy night spots. Dee’s Cafe (1314 East Carson Street; 412-431-1314; http://www.deescafe.com/) is a comfortable dive jammed on weekends with a mix of grizzled locals, bohemians and college students. Grab an Iron City beer and perhaps a game of pool ($6 an hour).
Sunday
11 a.m.
11) BRUNCH AND BRIC-A-BRAC
One of city’s more unusual brunch spots is the Zenith (86 South 26th Street; 412-481-4833; http://www.zenithpgh.com/), a combination art gallery, vintage clothing store, antiques shop and vegetarian restaurant. For those who can’t stomach tofu, brunch ($10) includes traditional staples like eggs, pancakes and French toast. It gets busy, so get there before it opens at 11 a.m. to avoid the line.
12:30 p.m.
12) THE OTHER OAKLAND
The Oakland district teems with intellectual energy from the University of Pittsburgh, Carnegie Mellon University and a bunch of museums. Start out at the Nationality Rooms at the Cathedral of Learning (4200 Fifth Avenue; 412-624-6000; http://www.pitt.edu//~natrooms), a 42-story Gothic-style tower on the Pittsburgh campus with 27 classrooms, each devoted to a different nationality. Then head over to the renowned Carnegie Museum of Art (412-622-3131; http://www.cmoa.org/) and Carnegie Natural History Museum (http://www.carnegiemnh.org/), both at 4400 Forbes Avenue, for Degas and dinosaurs. Before leaving, pick up a handy walking tour of Oakland and its public art. Not mentioned in the booklet but worth seeking out: the brick wall on Roberto Clemente Drive that was part of the outfield wall of the Pirates’ long-ago home, Forbes Field.
THE BASICS
Delta and JetBlue have nonstop flights from Kennedy Airport in New York to Pittsburgh for about $238, according to a recent online search; American Airlines and US Airways fly nonstop from La Guardia.
The Parador Inn of Pittsburgh (939 Western Avenue; 412-231-4800; http://www.theparadorinn.com/) is a Caribbean-themed bed-and-breakfast in an 1870s mansion on the city’s North Side. All rooms are $150 a night.
Also on the North Side is the Priory Hotel (614 Pressley Street; 412-231-3338; http://www.thepriory.com/), a European-style boutique hotel in a restored 19th-century Benedictine rectory. Doubles start at $145.
For more upscale lodging, try the Renaissance Pittsburgh Hotel (107 6th Street, 412-562-1200; www.marriott.com/hotels/travel/pitbr-renaissance-pittsburgh-hotel), a 300-room downtown hotel in a historic landmark. Rooms start at about $180 a night.

P.S.S. I leave for California the day it opens though so I hope it's still running in a few weeks

P.S.S.S. If anyone wants to go w/ me just send me an email or post