I've included a picture of the book cover that my employer Mother Teresa Hospice / Progressive Home Health has just published (literally 2 days ago it was completed) comprised of selected poems I wrote with local area nursing home residents from when I started doing the poetry workshops January 31, 2016 - December 2016 which also includes testimonials form residents, family members of residents & staff members at the facilities.

- in my Pittsburgh Poetry Workshops I conduct around greater metropolitan #Pittsburgh for long term care nursing home residents where we read and write poetry together - I have used many triggers to engage + stimulate memory & new ideas including by referencing Stephen Foster, reading his bio & playing his music. I've also referenced the Chatter Box at the William Penn Hotel and how Count Basie was broadcasted live from there to the world and I've used his music as well as other hot & sweet big band music such as "The Old LampLighter" and "The Boogie Woogie Bugle Boy." 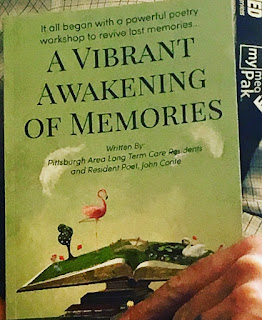 Good wishes,
John
Sent from my iPhone
Posted by My Straw Hat at 4:10 PM