What?! Trump me?! Trump U.
Willie Geist - Aug 10, 2016 - "when our elite media colleagues from NY & DC would come on Morning Joe and roll their eyes & laugh about the rise of Trump for president, we at MSNBC's Morning Joe were not advocating for Trump but rather providing explanation on why he might be winning."
Those who rolled their eyes & were laughing off Trump are clearly as guilty for his presidential popularity than those who voted for him. And now the outrage instead of trying to learn about the country in divide and trying to heal it for all?!
&$&$&$&$&$&$&$&&&&&&&&&
Bernie's Reasons to Want Debbie W.S. Out ... Still after the DNC convention August 2016
Well the emails were pretty nasty and beyond paltry .... Premeditated malice of character through rumors? Character assassination via slander, lies, false narratives, mixed with parallel investigations  and topped off with rigging the system flat out against a citizen and citizen who serves in political life .... Talk about seeing Russia from your backyard?!

Sanders has sent at least two emails to supporters in Florida, looking to oust Schultz from her House spot in an Aug. 30 primary, according to the Washington Post. Her opponent, Tim Cnova, is behind by 8 to 10 points in local polls.

"This race is very important for Our Revolution," Sanders wrote in an email sent Tuesday afternoon. "If we can win this tough fight in Florida, it will send a clear message about the power of our grassroots movement that will send shockwaves through the political and media establishments." 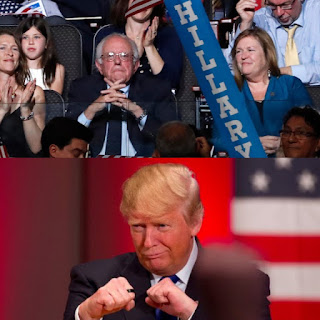 Good wishes,
John
Sent from my iPhone
Posted by My Straw Hat at 1:13 PM