Renée Herlocker celebrates the 4th in the most delicious way...


Renée Herlocker ‏@reneeherlocker celebrates the 4th in the most delicious way ... 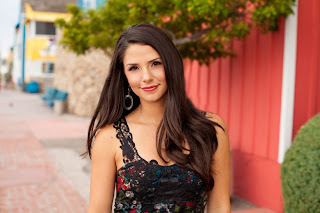 She covers competitive eater Joey “Jaws” Chestnut break his own record on Thursday, July 4th 2013 scarfing—wait for it—69 hot dogs in a row to win his 7th straight Nathan’s Hot Dog Eating Contest on ESPN. 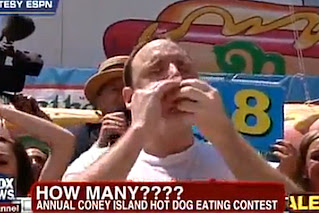 The annual competition on Brooklyn’s Coney Island is a major event in the competitive eating world, and with six championships already under his Mustard Belt, Chestnut is considered the Michael Jordan of the sport.

Chestnut ate 67 links last year, but cleared his own record by two kosher dogs on this July 4th.
Experts, such as they are, estimate Chestnut would gain approximately eight pounds during the competition. More, by the numbers: 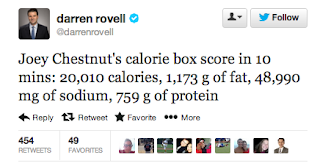 Mediaite immediately following this event and world record had a nice piece up on its site within nanoseconds which includes not only info found here in #theneweverydaymedia but also video of the thrilling final moments ... Watch it here on its site, via Fox: http://www.mediaite.com/tv/and-the-winner-of-the-2013-nathans-hot-dog-eating-contest-is/