Drawing power from the Mississippi 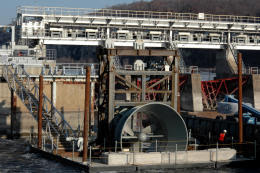 April 2009
HYDRO GREEN ENERGY
Houston-based Hydro Green Energy’s hydrokinetic power turbine recently was installed on the downstream side of a dam on the Mississippi River in Hastings, Minn.


A Houston startup has installed its first water-powered electric turbine on the Mississippi River in Minnesota and plans to have a second unit installed this year.

Hydro Green Energy placed the turbine just downstream from a hydropower plant operated by the city of Hastings, Minn., where it has been cranking out about 100 kilowatts, enough to power about 60 homes.

The turbine, which is suspended under a barge anchored downstream from the dam’s spillway, is the first project of its kind licensed by the Federal Energy Regulatory Commission, said Wayne Krouse, chairman and CEO of Hydro Green Energy. That approval is important because it lets the turbine tie into the local electric grid and paves the way for future projects, he said.

Six percent of the nation’s electricity came from hydropower in 2008, according to the Department of Energy. Most comes from dams also used for flood control.

Hydrokinetic power, such as the Minnesota project, is different in that it taps into existing currents, including tidal currents and wave power, rather than water running through dams.

One other hydrokinetic project is installed in the U.S. — Verdant Power’s pair of turbines mounted on the floor of the East River between Manhattan and Brooklyn.

Those units provide some power to a nearby store and a large parking garage, but they don’t have a FERC license allowing them to tie in to the grid.

Water power from hydroelectric dams doesn’t receive tax incentives like wind or solar electric power projects, but hydrokinetic projects are included in a draft federal bill that requires states to have a certain percentage of their power come from renewable sources in the future.

A 2007 study by the Electric Power Research Institute found that the U.S. could develop at least 13,000 megawatts of river- and ocean-based kinetic hydropower project by 2025.

Krouse got the idea for the company several years ago while flying above the Pacific Ocean on a business trip for Exxon Mobil’s chemical business.

“Looking at all those whitecaps for so long got me to thinking about the power of the ocean, and it reminded me of a National Geographic article at my grandmother’s house when I was a kid that talked about ocean thermal energy conversion,” he said.

Krouse scoured patent databases to determine how far along ocean thermal technology had been developed.

He found there had been some patent work completed for capturing wave energy, but very little to get energy from river and ocean currents.

With that area relatively untapped, Krouse set to work designing a system, including determining why previous efforts had failed. By 2005, after investing all of his personal savings and his 401(k), he was awarded a patent for the system, essentially a barge that suspends a water-driven turbine underneath it, he said.

In 2008 venture capital firms invested $49.5 million in wave-energy companies and another $28 million in current and tidal companies like Hydro Green, according to data compiled by Cleantech Group.

Of that $28 million, $24 million was invested in companies based in Great Britain, where there has long been interest in such projects.

Hydro Green closed on $2.6 million in funding last year, including money from Quercus Trust, a venture capital firm that specializes in “green” investing.

Finding investors in Texas has been discouraging, Krouse said.

“Houston has this immense wealth, but it seems people here only understand real estate and oil and gas,” he said. “No one has any interest in renewables, which seems ironic, given we’re the energy capital of the country.”
tom.fowler@chron.com

Best of the Roses,
John French
mystrawhat.com
http://theneweverydaymedia.blogspot.com
myspace.com/mosshead7
Posted by My Straw Hat at 9:12 AM