Catherine Frot and Déborah François
From Time Out London

Denis Dercourt’s stylish, subtle and highly assured film is a pleasingly suspenseful psychological drama in the style of Hitchcock or early Chabrol. Déborah François plays Mélanie, the smalltown butcher’s daughter whose ambitions as a pianist were dashed during a childhood audition for the Conservatory when one of the jurors, famous concert pianist Ariane Fouchécourt (Catherine Frot), distracted her by signing an autograph. A decade after this unwitting but fateful slight, shy, quiet Mélanie happens to find herself working as an intern for the law firm owned by Fouchécourt’s husband Jean (Pascal Greggory). Her diligence and dependability lead him to hire her as a governess to his son, and soon enough she’s firmly ensconced in their home and helping out as Ariane’s page-turner as the pianist prepares for a big comeback concert. Is Mélanie plotting revenge? Nursing a crush – and if so, on whom? Or is she merely hoping to bask in some reflected glory? 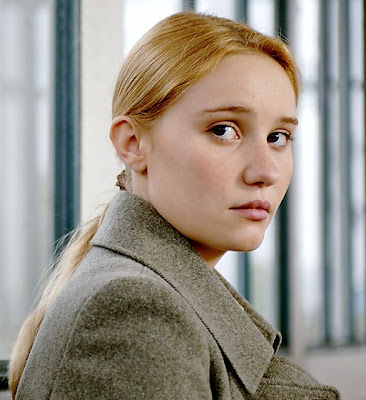 Déborah François
Dercourt’s cool, extremely elegant and often witty film remains admirably ambiguous until the very final scenes, and even then the script wisely foregoes tying up too many loose ends. It’s a meticulous piece of work, beautifully shot by Jérôme Peyrebrune, and assembled with a proper understanding of music and the important role it can play in people’s lives. In building both narrative tension and psychological resonance, Dercourt is helped no end by the excellent performances, most particularly that of young François, quite superb in only her second movie after an excellent (but very different) debut role in the Dardennes’ ‘The Child’.
Best of the Roses,
John French
mystrawhat.com
theneweverydaymedia
myspace.com/mosshead7
Posted by My Straw Hat at 10:20 PM