Bhutan, which was until now isolated from outside world and has its unique form of Tibetan Buddhism, has been hailed as the last Shangri-La. 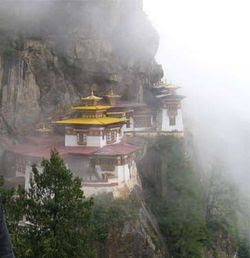 The Taktshang Monastery, also known as the "Tiger's Nest". Bhutan is a predominantly Buddhist country, with the religion forming an integral part of everyday life. 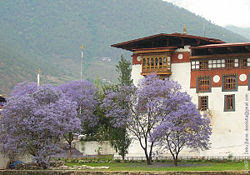 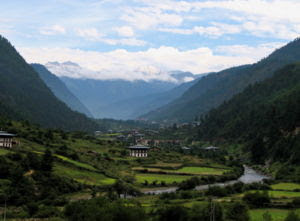 Haa Valley, September, 2006
The Kingdom of Bhutan (/buːˈtɑːn/) is a landlocked nation in South Asia. It is located amidst the eastern end of the Himalaya Mountains and is bordered to the south, east and west by India and to the north by the Tibet Autonomous Region of the People's Republic of China. Bhutan is separated from Nepal by the Indian state of Sikkim. The Bhutanese call their country Druk Yul (land of the thunder dragon).[1]
Bhutan is one of the most isolated and least developed nations in the world. Foreign influences and tourism are heavily regulated by the government to preserve the nation's traditional culture, identity and the environment. The landscape ranges from subtropical plains in the south to the Himalayan heights in the north, with some peaks exceeding 7,000 metres (23,000 ft). The state religion is Vajrayana Buddhism, and the population is predominantly Buddhist, with Hinduism being the second-largest religion. The capital and largest city is Thimphu. After centuries of direct monarchic rule, in March 2008, Bhutan held its first democratic elections. Bhutan is a member of the South Asian Association for Regional Cooperation (SAARC).
On November 13, 2005, Chinese soldiers crossed into Bhutan under the pretext that environmental conditions had forced their retreat south from the Himalayas. The Bhutanese government allowed this incursion (after the fact) on humanitarian grounds.[citation needed] Soon after, the Chinese began building roads and bridges within Bhutanese territory.[7] Bhutanese Foreign Minister Khandu Wangchuk took up the matter with Chinese authorities after the issue was raised in Bhutanese parliament. In response, Foreign Ministry spokesman Qin Gang of the People's Republic of China has said that the border remains in dispute (completely ignoring the original official pretext for the incursion) and that the two sides continue to work for a peaceful and cordial resolution of the dispute.[8] An Indian intelligence officer has said that a Chinese delegation in Bhutan told the Bhutanese that they were "overreacting." The Bhutanese newspaper Kuensel has said that China might use the roads to further Chinese claims along the border.[9]
On February 8, 2007, the Indo-Bhutan Friendship TreatyPDF (30.6 KiB) was substantially revised. Whereas in the Treaty of 1949 Article 2 read as "The Government of India undertakes to exercise no interference in the internal administration of Bhutan. On its part the Government of Bhutan agrees to be guided by the advice of the Government of India in regard to its external relations."
In the revised treaty it now reads as "In keeping with the abiding ties of close friendship and cooperation between Bhutan and India, the Government of the Kingdom of Bhutan and the Government of the Republic of India shall cooperate closely with each other on issues relating to their national interests. Neither government shall allow the use of its territory for activities harmful to the national security and interest of the other." The revised treaty also includes in it the preamble "Reaffirming their respect for each other's independence, sovereignty and territorial integrity", an element that was absent in the earlier version. The Indo-Bhutan Friendship Treaty of 2007 strengthens Bhutan's status as an independent and sovereign nation.
Bhutan has no formal relations with the United States,[10] Russia, the United Kingdom or France. Informal contact with the United States is made through the U.S. embassy in New Delhi.[10]
The climate in Bhutan varies with altitude, from subtropical in the south to temperate in the highlands and polar-type climate, with year-round snow, in the north. Bhutan experiences five distinct seasons: summer, monsoon, autumn, winter and spring. Western Bhutan has the heavier monsoon rains; southern Bhutan has hot humid summers and cool winters; central and eastern Bhutan is temperate and drier than the west with warm summers and cool winters.
Though Bhutan's economy is one of the world's smallest, it has grown very rapidly with about 8% in 2005 and 14% in 2006. This was mainly due to the commissioning of the gigantic Tala Hydroelectricity project. As of March 2006, Bhutan's per capita income was US$ 1,321 making it one of the fastest growing in South Asia. Bhutan's standard of living is growing faster than that of its neighbouring countries and is one of the highest in South Asia.[citation needed] Bhutan's economy is based on agriculture, forestry, tourism and the sale of hydroelectric power to India. Agriculture provides the main livelihood for more than 80% of the population.
In a response to accusations in 1987 by a journalist from UK's Financial Times that the pace of development in Bhutan was slow, the King said that "Gross National Happiness is more important than Gross National Product."[13] This statement appears to have presaged recent findings by western economic psychologists, including 2002 Nobel Laureate Daniel Kahneman, that question the link between levels of income and happiness. The statement signaled his commitment to building an economy that is appropriate for Bhutan's unique culture, based on Buddhist spiritual values, and has served as a unifying vision for the economy. While no trend data is yet available, the policy seems to be reaping the desired results. In a survey in 2005, 45% of Bhutanese reported being very happy, 52% reported being happy and only 3% reported not being happy. Compare that, for example, with the USA, where only 30% report being very happy, 58% being pretty happy and 12% were not too happy (based on data from the General Social Survey). Based on this data, the Happy Planet Index estimates that the average level of life satisfaction in Bhutan is within the top 10% of nations worldwide, and certainly higher than other nations with similar levels of GDP per capita.
Best of Bhutan Roses,
Giovanni French
mystrawhat.com
Posted by My Straw Hat at 9:08 PM