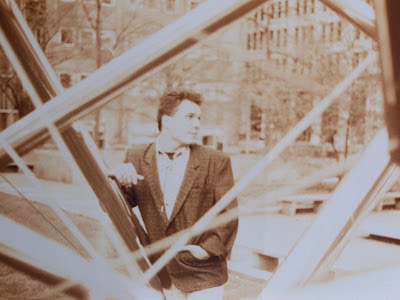 In 1988 the year when I was graduating from H.S. my parents
where gone on one of their trips -
leaving me alone w/ my older brother, Mrs. B., and one of the handiest of men, Frank L.
They brought me home an empty bottle of the
Jack London series by Kenwood Wines in Sonoma in which they drank
w/ an Exec from CBS while visiting w/ folks of Duke University in Raleigh, N.C.
I kept that bottle. I loved it for some reason and the preppy tie they also brought me.
My fascination w/ wine already had started but my fascination w/
Jack London was just beginning as well as Kenwood's Jack London series of Sonoma.

Jack London Series
Author Jack London once wrote of Sonoma County,
"The air is wine. Across Sonoma Mountain, wisps of sea fog are stealing. The afternoon sun smolders in the drowsy sky. I have everything to make me glad I am alive."
This patch of earth that so captivated Mr. London is home to Kenwood Vineyards. Kenwood plants, farms and harvests the historical, lava-terraced vineyards of Jack London's ranch, producing Cabernet Sauvignon, Zinfandel, and Merlot wines. Made only from Jack London vineyard grapes, these three wines are savored for their mint-accented berry flavors and smooth finishes. The dramatic Jack London label --a replica of the wolf's head Jack London used as his book-plate logo -- has created tremendous consumer interest and recognition in the wines.
Over 800 acres of Jack London's Beauty Ranch are now owned and operated by the California State Parks System. Visitors have the opportunity to hike, bike or horseback ride through much of the property, as well as view many of the ranch's buildings and Jack London home and grave, including the remains of the Wolf House.