Is Hillary Clinton Over Qualified Too Qualified for the Job?! …

Is Hillary Clinton Over Qualified Too Qualified for the Job?! …
When the Steel Mills mills shut down in Pittsburgh and hundreds of thousands of workers lost jobs in the Steel Mills it had a ripple effect from the center of downtown to the 3 river valleys and the hinterlands of greater metropolitan Pittsburgh.
A lot of these workers stayed loyal to the labor unions who were and are loyal to democrats.
And a lot of these workers were told they needed to go back to college to compete in today's world.
And a lot of Pittsburgh's young folk were also told they must have a college education to compete that the more educated you were the better chance of a high paying salary.
So, when there are little jobs available in metropolitan Pittsburgh and a ton of out-of-work experienced and now college educated folks what happens? ...
The sales guy for the steel company who didn't have a degree but worked his way up in the company with work ethic and a positive attitude who lost his job when the mills shut down now equipped with a college degree and interviewing for sales positions in the Pittsburgh area is now told time and time again he is "over qualified" ... yeah, "too qualified" for the job.
Whereas, on the other hand, the younger folks of the region who have had it pounded in their heads they need an education and the more the better come out of college with multiple degrees and masters and PhD's and they are also competing for scarce jobs and doing so with a heavy load of student debt because their parents were the ones who lost their jobs when the mills shut down and they couldn't afford to pay for their kids college educations without the family and kids taking on debt.
But the younger highly educated college kids who are entering the interviewing game are arriving at the interview with multiple degrees expecting equal value in a great high paying job that will pay off all their debt and guarantee a great quality of life - they are told they are "over qualified" ... yeah, "too qualified" for the job.
In 30 years what has HRC done for America? ... and done for the middle class who hasn't had the money to pay for a college education for all six kids? .... in the hinterlands and working class neighborhoods of Pittsburgh what has HRC done for them? ... Furthermore, what can she do and what is she prepared to do in the job as president compared to a hugely successful business man who's not part of a political power couple?
The dilemma for a conscience voter?
… Take a chance on a fresh take in politics from D.C. to create a strong middle class in America again at the cost of what?! ...
Trump's "stop and frisk" blanket policy is wrong and breeches the social contract between citizen and government and whereas his distrust for big institutional systems yet his blind eye & his blind trust in the criminal justice system is scary pandering that can lead to real life scenarios and cases captured by an omnipresent figure like Edward Snowden that goes beyond red flags and violations exposing criminal activity of law enforcement "government" against everyday  citizens that are not linked to terror at all period.
mystrawhat.com
& The NewEverydayMedia.com
++++ ++++ ++++
15th book of poetry "Whispering Angels" coming soon to
mystrawhat.com& TheNewEverydayMedia.com + celebrating the Top 45 Hottest New Everyday Media Female Personalities 2016
------{{{@ 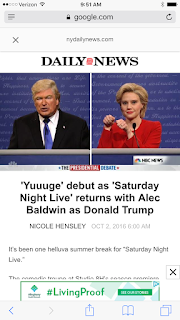 Good wishes,
John
Sent from my iPhone
Posted by My Straw Hat at 9:58 AM