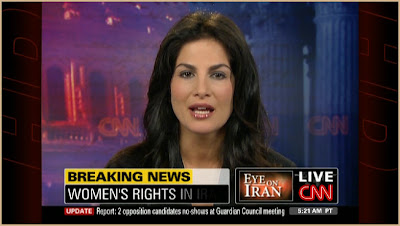 This is Iranian Rudi Bakhtiar of both FNC and CNN reporting for CNN regarding Women's Rights in Iran.
If you think women have it good over there or any other Islamic country or area where Muslim laws are heavily enforced by "morality police" and you think that women want to live this way and it's their choice. Then you are just fucking stupid and I suggest you go live over there as a woman or a man and then let me know what you think.
Why would you want to silence, cover-up, veil, erase a personal identity and not allow the same equal rights and, in addition, defy natural law?
It's all about control.
Slavery veiled in religious garb(age).
Latest News - 20th July 2009
Desmond Tutu, Nobel Peace Laureates, Iranian Poets and Artists Support July 25th Global Day of Action
“We deplore the violence and crackdown on peaceful protesters, the increasing restrictions on civil liberties, and the imprisonment of a growing number of civil leaders in Iran. ” Archbishop Destmond Tutu, Nobel Peace Laureate, 1984
“If one country sincerely wants to support democracy in another country that is under dictatorial rule, the only thing to do is to support the freedom fighters who stand for the democratic institutions of that country. Done this way, the sapling of democracy will bear the flower of freedom.” Shirin Ebadi, Iranian human rights activist, Nobel Peace Laureate, 2003
“The Iranian leadership is violating the country’s own commitments to international human rights treaties, as well as contravening Iran’s own laws.” Mairead Maguire, Nobel Peace Laureate, 1976
“We call for the release of all political prisoners, the secession of violence against protesters, and respect for human rights and civil liberties in Iran.” Jody Williams, Nobel Peace Laureate, 1997
The two most prominent living Iranian poets, Ismael Khoie, and Simin Behbahani, who lives in Tehran, have joined the Global Day of Action. Dariush, socially conscious singer and Iranian cultural icon, will perform at the Washington D.C. United 4 Iran rally.
Desmond Tutu, Shirin Ebadi , Mairead Maguire and Jody Williams are available for interviews.
Protests in Iran Continue – Global Activism Increasing
In over 55 cities around the world solidarity rallies are planned in support of civil and human rights for the Iranian people and for an end to the violence. Check www.united4Iran.org for a full list of participating cities and supporting organizations including Amnesty International, Human Rights Watch, FIDH, International Campaign for Human Rights in Iran, Nobel Women’s Initiative and Peacejam
Best of the Roses,
John French
mystrawhat.com
&
theneweverydaymedia
Posted by My Straw Hat at 8:35 AM

We also support human and women’s rights in
Iran. Fashion, environmental responsibility and social justice can all be combined to change the world, please read our post for more info: http://fashionableearth.org/blog/2009/10/13/cause-of-the-season-iran/