The Clash - Know Your Rights [live]
the clash - know your rights live album= from here to eternity punk rock
Want to see more from The Clash?
Songwriters: HEADON, TOPPER / JONES, MICK / SIMONON, PAUL / STRUMMER, JOE
Posted by My Straw Hat at 7:54 AM No comments:

Why Be George Clooney = Stacy Keibler, 33, UnderWear in Monaco???

One of my Upper East Side Manhattan cousins lives in Monaco. He's asked me to come visit a few times. .. Wish I were there this weekend. ..In fact, wish I were George Clooney.

Sure, a lot of guys tend to hate with a certain primal urge to rage on the modern day popular Alpha Male like Hollywood's George Clooney for being confident, rich, gorgeous, on the silver screen, smart, savvy, great dresser, really cool friends, his Italian Villa and without over-reaching an all-access laminated cat.

I actually would love to be George Clooney for all those reasons above but also just to be hanging with Stacy Keibler this past weekend in Monaco. 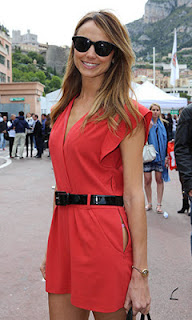 Stacy Keibler, 33, attended the Formula One F1 Grand Prix on Sunday in Monte Carlo, Monaco, but all is not right in this photo.

While at first glance George Clooney's girlfriend looks très chic in a red romper with a black belt, a closer examination shows she forgot to zip it up all the way, exposing the side of her underwear.
The "Supermarket Superstars" host happily posed for photographers, likely not knowing there was a wardrobe malfunction going on down below. And while the romper was a good fashion choice - showcasing Keibler's toned arms and legs - we all just saw a little more than she probably intended!

The blonde was a good sport about the incident, it turns out, tweeting on Tuesday: "At least zip slips are better than nip slips...#oopsie."

Too bad Clooney wasn't around to give her a helping hand. The actor has been busy shooting "The Monument Men" with Matt Damon elsewhere in Europe, where the 52-year-old is getting plenty of time to goof around with pals. 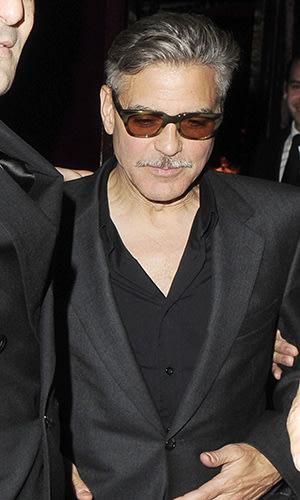 Clooney was spotted out to dinner in London on Saturday, hanging at a member's only club in Mayfair until 3 a.m. Before heading to the U.K., the Oscar winner spent time at his house in Lake Como, Italy, while Keibler hobnobbed around the Cannes Film Festival. The last time Keibler and Clooney were photographed together was on March 16 at Berlin's Grill Royal.

There have been rumors for a few months now this romance has fizzled out. Will Keibler and Clooney put those to rest and meet up since they are just a short plane ride away from each other right now? Guess we will have to wait and see.

Somehow, we're sure Keibler got his attention with this picture.
By Taryn Ryder | omg! – 18 hours ago

By the way, here's a really cool song kids by The Clash = Lost in the Supermarket