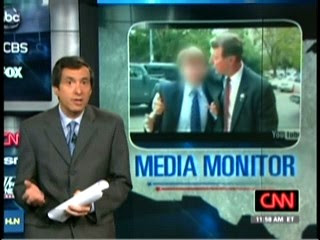 Almost every Sunday before or during reading the NY Times on Amazon's Kindle I watch Reliable Sources on CNN w/ Howard "Howie" Alan Kurtz. (born August 1, 1953) is an American journalist and author with a special focus on the media. He is host of CNN's Reliable Sources program, and Washington bureau chief for The Daily Beast. He is the former media writer for The Washington Post. He has written five books about the media. He has been described as the nation's "most influential media reporter".

Since 1998 Kurtz has been the host of the weekly CNN program Reliable Sources, a cable television program that explores the standards, performance and biases of the media. Kurtz leads the scrutinizing of the media's fairness and objectivity by questioning journalists of top news organizations, including those at CNN. The show premiered in 1992 when it originated as a one hour special to discuss the media's coverage of the Persian Gulf War.

His books remind me of the type I read in my "Mass Media" classes studied @ Penn State University (Main Campus): Media Circus: The Trouble with America's Newspapers; Hot Air: All Talk, All the Time; Spin Cycle: Inside them Clintons & their Propaganda Machine; The Fortune Tellers: Inside Wall Street's Game of Money, Media and Manipulation; Reality Show: Inside the Last Great Television News War.

Aside from Red Eye w/ Bill Schulz & Greg Gutfeld Reliable Sources is up there w/ being the best of smart & savvy TV = "good stuff" ...

This morning on Reliable Sources Howard used the term "New Media" in a conversation about the huge FaceBook IPO and how FaceBook and New Media are turning people on to content otherwise traditionally held and delivered by Newspapers, Magazines and TV NEWS from traditional journalists. The discussion plainly stated that FaceBook redefines the meaning of "friend" and New Media is redefining how content is delivered, shared and received.

One of the guests suggested that getting NEWS from friends is an old concept and, however unfortunate or, fortunate, I guess, is simply how some people just get there NEWS and are informed. He continued that New Media is a way for individuals to pull-up on their own the "good stuff" they want and to ignore the content traditional media sources deem "newsworthy" for our consumption and deliver to us everyday.

The topic came to close w/ Howard Kurtz referring to traditional content providers of newsworthy status as "the Dinosaur Media."

In Monitoring the Media, the conversation then turned to the current case of overzealous gossip used as reporting in a story about Yale QB Patrick Witt and his Rhodes scholarship withdrawal. Howie connected how failing to know all the facts and just going on suspicion and gossip is beyond irresponsible for a so called credible NEWS outlet as it basically just slandered some one's reputation on a national level - or how many of us still read the NY Times. Yes, the NY Times has backed off its scandalous account but, hey, the damage is done.

Sure it's easy to believe that an athlete like a Yale QB could be accused of a violent assault of an unwelcomed perverted sexual nature --- (I know as a young student I wouldn't take a ride from a wrestling coach and I still wouldn't as a grown man) but one would think that a credible NEWS source like the NY Times is more responsible in reporting - and not just dealing gossip for a catchy headline to make a quick buc!

Logic is a useful tool to know in the world of computing and computing power --- however, to really empower one's self in this world of New Media is to know the other type of logic taught by philsophers and attorneys that can view stories, content, articles and recognize "the Straw Man" and "the Bandwagon" and "the Slippery Slope" and "the Appeal to Celebrity" arguments.

I mean, if more and more we're accepting content shared by our friends on FaceBook and Twitter (or on the front porch or in the school parking lot, Starbucks, the club) as NEWS then don't you want to recognize an agenda driven piece to determine if something is just paltry, petty gossip or something actually newsworthy and credible from Reliable Sources?. ..

Best of the Roses but not rose colored glasses,
mystrawhat.com
&
the new everyday media