Previously on Headline News with Robin Meade = last Friday Robin and President George W Bush 41 sit around on a Maine morning and have coffee and coffee cake and talk about the weather ... 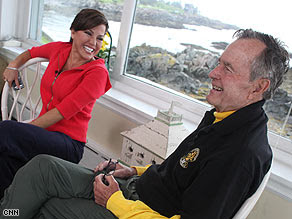 And, then, out of the blue, Bush 41 decides that for his 85th birthday he wants to go skydiving so he assembles the Golden Knights that live in his compound and away they go ... 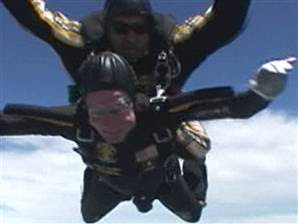 In recent years, Bush's jumps have been about fun and celebration, but he first parachuted out of a plane when he was a naval aviator shot down over the Pacific Ocean during World War II. 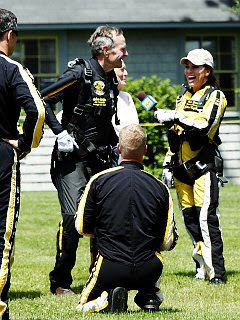 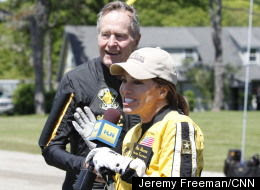 "People kept asking all week leading up to this, 'Are you afraid?'" Meade said. "And my answer, up until about 1PM Friday, was: no, I'm thinking more about the interview with President Bush 41 and keeping focused on that, and then I can think about the jump. I gotta tell you, the whole way up in the plane ride I kept wondering if I would lose my cookies in front of a president, his family on the ground and on national television. I'm happy to say I never needed the 'party bag"...but when they said in the plane, 'It's time to go," I told my producer my that my knees were shaking. That's when I finally got nervous."

Meade said that while airborne, she "kept sucking down some oxygen for fear I'd get sick," while the former President was consumed looking for his family's Kennebunkport home.

As for the skydive itself, Meade said "the first two or three seconds in free fall didn't feel so hot" but after her body adjusted it felt more like she was flying.

"I think I grunted or squealed once or twice in the jump and when the parachute opens," she said. "It rips and jerks you upward. After the parachute opened I could speak to my tandem partner, Sgt. First Class Kurt Isenbarger, originally from Ohio. He asked as we were parachuting if I wanted to spin and show off and come in fast. I said, no I definitely didn't want to spin. We were coming in fast enough!"

Meade added that she and the former President set a date to skydive again in five years.

"President Bush invited me to go again when he turns 90." she said. "Deal!"

Best of the Roses,
John French
mystrawhat.com
&
theneweverydaymedia
Posted by My Straw Hat at 5:43 AM No comments:

The Bible, the Koran, the Torah are not virtual road maps they’re just guides for a “big cash in” if that’s what you’re into and believe you need more greed to take with you …
Ah, when do you think we’ll understand that taking a stand is just not an ordinary protest
that you can attend and then go home and pull the covers over your head? It’s about change that brings about giving one life, love & peace on Earth like George Harrison said
And it offends me to walk around D.C. and see pious people in grand suits because if I was notably against their agenda for their own personal treasures I know they’d shoot me dead
And it offends me to see women who wrap their heads in veils to conceal their suppression in a way that’s meant to really steal democratic elections in oil rich Islamic countries where if you’re a freedom fighter you can really feel all the hatred of oppression where the mystery of Persian night is over for me --- I know that they’re not free
So, well, that’s okay as long as you don’t ever even try to apply that shit on me, man … because I am a Freedom man who likes my ripped and frayed, faded Levis jeans and wants the freedom to grow my hair long and shave my face and contribute to the human race
And if that means by getting higher to see above the blowing sands of the land well, then, that’s okay with me and it should be with you = don’t tell me what to do = I drink, I swear, I sex, I don’t believe in your lies = you’re a liar = you’re liars and I am politically correct here so don’t ask me to excuse myself as I am no diplomat for your cause(s) for treasure
As I’m just trying to get along by myself and be a free man in America, in the world, in my worn vintage Levis like the color of D.C. blues washed in the big corporate machine
where we all wash our hands after taking a stand for the causes we really should understand

written Saturday June 13, 2009 - Sunday June 14, 2009
best of the Roses
john french
mystrawhat.com
&
theneweverydaymedia
Posted by My Straw Hat at 7:42 AM No comments: