Who Are You, Polly Maggoo? 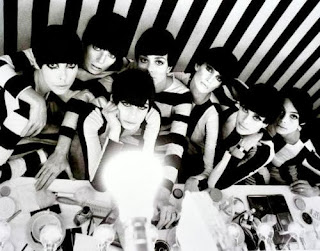 (1966) - William Klein = a groovy movie for you to view in full here http://www.youtube.com/watch?v=Y34uDNzkYDk 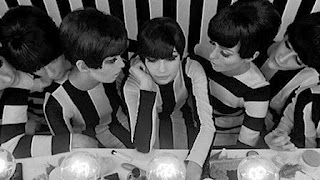 Who Are You, Polly Maggoo? (French: Qui êtes vous, Polly Maggoo?) is a 1966 French film directed by William Klein.
It is a satirical art house movie spoofing the fashion world and its excesses. It stars Dorothy McGowan as supermodel Polly Maggoo being followed by a French television crew. It also stars Grayson Hall as Miss Maxwell, a fashion magazine editor modeled after Diana Vreeland, and Philippe Noiret as the TV reporter and director. Also appearing in the film are Jean Rochefort, Sami Frey and Alice Sapritch.
McGowan, the Brooklyn-born star and one-time Vogue cover girl in 1962, was one of William Klein's favorite models. After the release of the film, which was McGowan's first and only film role, she disappeared from public view and apparently neither acted nor modeled again, according to Klein. 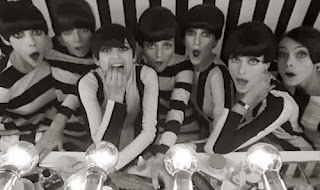 We'll give you #Newsworthy
Posted by My Straw Hat at 9:41 AM No comments: 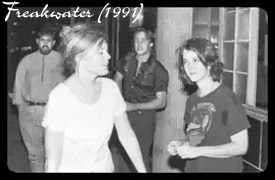 Cloak of Frogs
I'm sitting at this table I painted a shiny red
With a bowl full of oranges, a candle and a half a cigarette
I turn on the radio watch the tubes begin to glow
And the light flickers with the voice of one who knows

Freakwater opened for Wilco for a few shows. 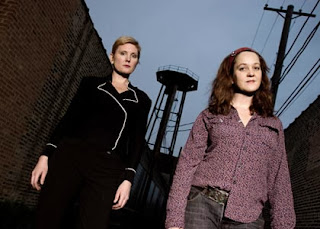 Freakwater best exemplifies the representative traits of alt.country discussed here. Centered around the songwriting and vocal team of Janet Bean and Catherine Irwin (with bassist David Gray), Freakwater play a brand of country music that has been virtually unheard since A.P., Sara, and Maybelle Carter parted ways over fifty years ago. The band officially came together in 1989, recording a pair of albums on a small independent label and then switched to a slightly more prominent indie label. Their sound hangs on Bean and Irwin's emotive harmonies, acoustic guitars, and other stringed "traditional" instruments, betraying almost none of the changes in country music in the last half decade. Even electric guitars and drums are almost nonexistent on their recordings. While the women of Freakwater are indebted to early country music, citing the Carter Family and the Louvin Brothers as influences, they are not strictly country purists in the Nashville sense of the term. Bean, with her husband, has spent much of the last decade writing and performing in Eleventh Dream Day, an indie rock band far different from Freakwater. Freakwater also recently rejected a Nashville-based major label deal in favor of remaining with the indie label Thrill Jockey (which is not known for its country roster) thus strengthening their anti-Nashville image. Remaining with that label virtually assures that Freakwater albums will not be available in major retail outlets and that they will not receive exposure in traditional media. In their marketing, they also refrain from the Nashville standard; their album covers, painted by Irwin, are expressionist pieces that convey the idea of cover art as "art," a convention of rock music which was extended in the indie world.

"Thoughts in time and out of season the hitchhiker stood by the side of the road and leveled his thumb in the calm calculus of reason."

... Not sure if phrase "building blocks" of life actually gets people thinking too square and habit of always leaning on a sure thing = squares can be squared. Whereas atoms are more representative as the form of a circle = organic matter comes from the mysteries of life and death that we have not conquered and constantly remain afraid of (no one knows for certain) .... So those who must try and calm their fears need the in-organic finite confidence of childhood blocks they can stack ... Atoms fuse into each other and do all kinds of things that appear magical ... Like alchemy ... 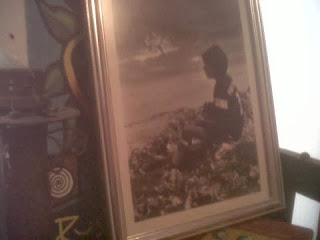 me in Barbados as a kid = contemplating life & death & its circle

We'll give you #Newsworthy
Posted by My Straw Hat at 8:26 AM No comments: