When “Really Cheesy” is a Great Thing

Claire is a foodie who is also a hottie and knows a good grilled cheese = She may very well make it on the Top 100 Hottest women of the new every day media (celebrating savvy, smart & hot women of new everyday media) for upcoming e-book New Media Madness: an everyday art on mystrawhat.com = to include Top 100 Hottest & a little hot poetry too. ..

The Grilled Cheese Truck: When "Really Cheesy" is a Great Thing

The land of glittery tans and silicon dreams, Los Angeles is no stranger to the many manifestations of cheesy. Meet Dave Danhi, President and Executive Chef of The Grilled Cheese Truck, one of the country's most celebrated food trucks. Here, he talks to Poor Taste about his appetite for seafood, what he loves most about Los Angeles, and the perfect grilled cheese.
What inspired the idea of The Grilled Cheese Truck? "A friend of mine sent me an invite to The Grilled Cheese Invitational back in 2009 and I realized I had never competed in the food competition in all the years that I had been a chef. I went and there was a line over a mile long and over five people wide and that's when I realized that there is such a large grilled cheese food following."

What about the grilled cheese sandwich do you think attracts such a large following? "What I try to bring it back to and one of the reasons for our success is that grilled cheese is the ultimate comfort food and everybody in this country was brought up with a grilled cheese sandwich. We take their childhood food memories and feed their adult palettes. It makes them feel like kids again."

What is your second favorite way to savor cheese? "I'm a purist when it comes to that. I love just a cheese board with cheese at the right temperature and some good, crunchy bread. I love to hit the cheese tastings in Los Angeles."
What makes or breaks a grilled cheese sandwich? "Some people are purists and when I talk to them it's cheddar and bacon, cheese and bread. For me, being the chef, it's a good marriage of flavors and textures– but it's got to be cooked correctly. I feel very strongly that the butter needs to be put onto the bread rather than onto the pan because when you put it on the pan the sandwich feels greasy. I have two people that spend time just buttering the bread."

"We have to re-impress everyone every day. We're the second most followed truck in the country next to Kogi, and never do we assume that there's going to be a line in front of the truck. The goal is to keep impressing people."

As a food innovator in Los Angeles, what do you like about your city? "I like that Los Angeles is so casual and that I don't have to be in a suit and tie in order to eat at a fancy restaurant. One of my biggest reasons as a chef is that the produce here is at the top of the list and the seafood is the best in the country–whether it's the fish markets, the farmer's markets, or the local purveyors."

What about Los Angeles makes it such a promising breeding ground for new food trucks? "One of the reasons is that we're a very spread out city–we're more a horizontal city than a vertical city and I think that has helped with the food trucks, but to be honest with you I think it's more a national thing. This country has never had a large street food culture and I think the country has been dying for a street food culture and due to the economy, people can now go to date-night for 25 dollars."
Posted by My Straw Hat at 1:29 PM No comments:

Jim Norton: Best of the Roses for the Cowboy's Girl 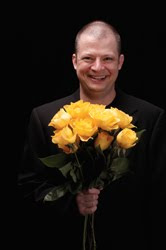 New Media Madness: an everyday art
Posted by My Straw Hat at 9:08 AM No comments:

Jack Hanna on Fox and Friends this morn re: Wild animals on the loose in Zanesville

OK, so 50 of these wild animals have already been shot dead by local officials and now they're calling in the Columbus, OH Zoo to help. ..help shoot the other 30 or so wild animals loose from the Zanesville property w/ tranquilizers so they can preserve their lives and take care of them properly. .. And now Jack Hanna has been called on to help this wild and dangerous (for all involved) situation.
HOWEVER, first Jack Hanna is going to be stopping by Fox and Friends this morn so he can "tell us" what he's "going to do" to help. ..
Being about 100 miles from Zanesville which is nothing for a Grizzly and other wild animals to roam and, for the safety of these innocent animals that were held captive and found themselves free after the murder of their owner, I'd be a lot cooler w/ Jack Hanna getting his expertise to Zanesville pronto and skipping this media opportunity until everything is settled.

Your sno-cone
and it's piss and blood
it's in the cards
(oh, oh)
get well soon
EVERYBODY!!
do all lies
have a taste?
let it go
i don't know oh..
a cow's neck
bad shave
in the low blow slo-mo
it's alright
you won't set the kids on fire
oh but i might
ho

You come on
sentimental
if the solar car's coming
i'm home
The Magna Carta's
on a SLim Jim blood
bruthal
the sunk soul
with the coal clean toe
is the muthal
yea. that's right
when you find out
i'm all inside
you still might

Last nite on the back porch while listening to an NPR interview with Mark Olson and Gary Louris on the new and, with patients & understanding, long awaited Jayhawks album --- And they were politely honestly answering the tough questions of a soundingly smart & cute female interviewer - commenting how not having the big hit on the radio and being bigger than what they had become is probably the reality of their longevity and beautiful rabid fanbase = Well, even though Wilco's new album is strangely on the Billboard charts upon its release - I think this odd premise rings true for them too. .. (like a couple others we may know, Ho). ..

This video of Wilco frotman Jefff Tweedy makes me smile and compelled me to grab the heavy Ralph Lauren whiskey drinking glass and my acoustic six string guitar and hit the back porch so I too can smile like this. .. Mike, so how about those bass players who play guitar??? (first few seconds do focus into a sure shot) http://www.youtube.com/watch?v=nfKj-GflL4Y&feature=related


Best of the Roses,
mystrawhat.com
&
the new everyday media