1).
Watching the reunion tour of Robert Plant and Jimmy Page of Led Zeppelin March 25, 1995 with Pittsburgh's own Rusted Root (winning the coveted opening slot for several dates) from the Mario Lemieux and a family friend's box I gratefully scored --- watching on with my now wife (who I had gone on a handful of dates at the time) and some friends of ours --- Hearing Robert Plant tell us that he's been on tour with a lot of bands in his time and being on tour with Rusted Root for this time made him feel compelled to tell us just how lucky Pittsburgh is to have them. 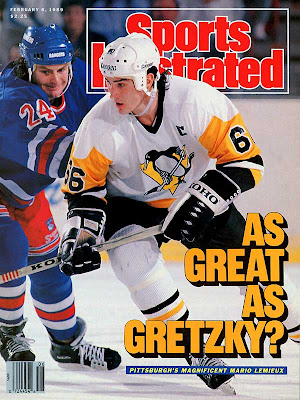 2).
All the wonderful moments watching Mario Lemieux on the ice including his 600th goal and an amazing game where the Pens where down by two goals with a little more than one minute left on the clock and Luc Robitaille and Mario tied the game and won in overtime (my girl and friend "Fat Tuesday" wanted to leave but I convinced them to stay because I had a feeling).
3).
Sydney Crosby

4).
Attending the first Fresh Fest featuring RUN DMC, Whodini, Kurtis Blow and the Fat Boys in 1984 as one of the only 14 year old white boys in or out of the Civic Arena

5).
As an eleven and twelve year old sitting at the glass (pounding on the glass) of the Civic Arena wathcing Paul Baxter, Pat Price, Randy Carlyle, Mike Bullard, George Ferguson and Pierre LaRouche - and then "sneaking" down stairs and hanging out outside the locker room after the game with a good friend of the family (close to the Pittsburgh Penguins) looking on ... (and in the summers being taught by some of these guys at the Ken Schinkle School of Hockey - where Pat Price gave me a lot of one-on-one time I'll never forget).
Best of the Roses,
mystrawhat.com
&
theneweverydaymedia